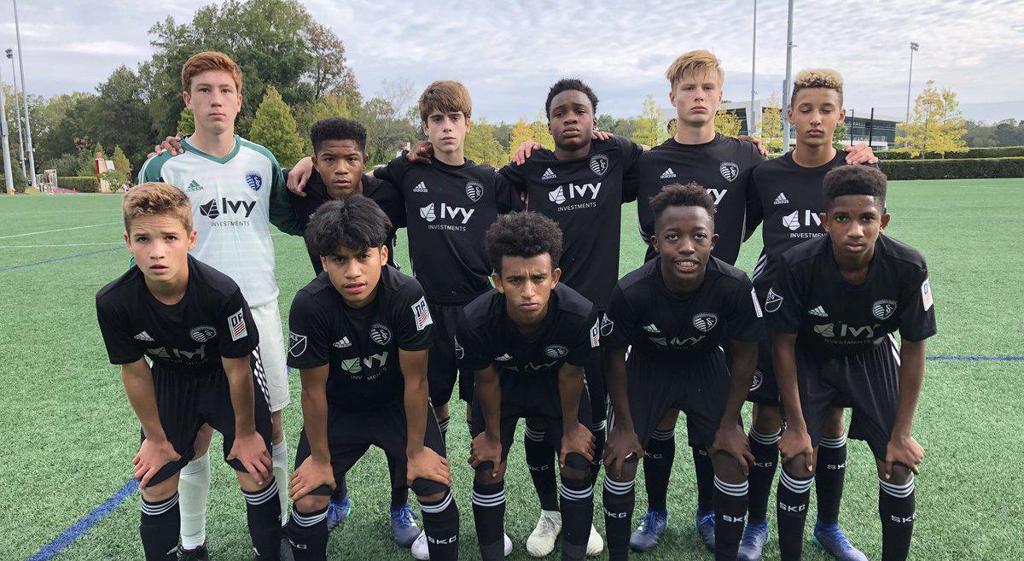 Three Sporting Kansas City Academy teams ventured southeast over the weekend for a pair of friendlies at the Children’s Healthcare of Atlanta Training Ground in Marietta, Georgia.

Returning to action for the first time since Sept. 22, the Sporting KC U-19s went head-to-head with an Atlanta side comprised of several players who were part of the U-16 team that won the 2017 U.S. Soccer Development Academy national championship. Sporting KC created a flurry of chances in the early stages, but the hosts struck twice in three minutes just before halftime to take a 2-0 lead. Goalkeeper Brooks Thompson made multiple saves in the second stanza to keep his side in the game, but the visitors were unable to find the back of the net themselves and fell 2-0.

In Sunday’s rematch, the U-19s delivered a stronger performance but ultimately suffered the same fate, conceding the lone goal of the game in the 26th minute. The final half-hour saw Sporting KC come agonizingly close to leveling on multiple occasions, with Michael Scavuzzo firing narrowly wide and Gyuwon Chong hitting the crossbar in quick succession. Thompson produced a superb stop in the 70th minute to keep the deficit at 1-0, but Sporting KC’s bid for an equalizer was again thwarted by the woodwork when Jahon Rad’s strike off a clever feed from Enzo Mauriz rattled the post.

Long and Peterson score in U-17 defeats

The Sporting KC U-17s kicked off their weekend with a 2-1 setback to Atlanta United, conceding twice in the first half before bouncing back into the game after intermission. A powerful header from Zion Long gave Sporting KC a lifeline, but Atlanta saw out their slender lead to the final whistle.

On Sunday, the U-17s faced another Georgia-based opponent in United Futbol Academy. Sporting KC trailed 1-0 at the break but answered in the 53rd minute on a well-deserved goal from Keith Peterson, culminating from a wave of intense pressure in the attacking third. United FA would strike twice in the late stages to seal a 3-1 victory in a matchup that remained delicately poised until full time.

The Sporting KC U-15s earned an impressive 2-0 win over Atlanta United FC on Saturday, but only after the first 60 minutes of an even contest unfolded without a goal. Goalkeeper Javier Zaragoza made a handful of strong saves en route to the clean sheet, notably spurning an Atlanta attacker one-on-one in the 36th minute. The U-15s broke through on the hour-mark when a venomous free kick from Rokas Pukstas was saved by the Atlanta keeper and promptly bundled home by U.S. youth international Osvaldo Cisneros. Twelve minutes later, Cisneros turned provider when his brilliant pass was settled and finished with aplomb by Dalton Visconti to secure the 2-0 win.

Sunday’s rematch saw Sporting KC’s fortunes flip. The score was tied 1-1 at halftime after Gage Akalu bagged a stunning scorpion kick off a corner in the 30th minute, but Atlanta scored five times in the second half to notch a 6-1 triumph.

While the Academy was competing in Georgia, the fruit of its labor was on display Sunday in Kansas City as the Swope Park Rangers punched their ticket to the 2018 USL Cup Playoffs with a 5-1 demolition of LA Galaxy II at rainy Children’s Mercy Park.

Three Sporting KC Academy products found the back of the net—Wan Kuzain Wan Kamal, Felipe Hernandez and Wilson Harris—as head coach Paulo Nagamura’s side sealed progression to the postseason and a date at Sacramento Republic FC, kicking off at 9:30 p.m. CT Saturday on ESPN+.

Up Next: Saturday tripleheader vs. Dynamo at Swope

All three Academy teams will continue their 2018-19 U.S. Soccer Development Academy seasons on Saturday in a tripleheader against the Houston Dynamo at Swope Soccer Village. The U-15s will kick off at 9 a.m. CT, followed by the U-17s at 11 a.m. and the U-19s at 1 p.m. All three matches are free and open to the public to attend.

The Sporting KC U-13s and U-14s, meanwhile, will travel to Waukegan Sports Park in Waukegan, Illinois, for the 2018 Central Regional Showcase. The U-13s will play a total of four games from Friday to Saturday, while the U-14s will play four times from Sunday to Monday. Follow @SKCAcademy on Twitter for live updates on Twitter this weekend and throughout the 2018-19 Academy season.