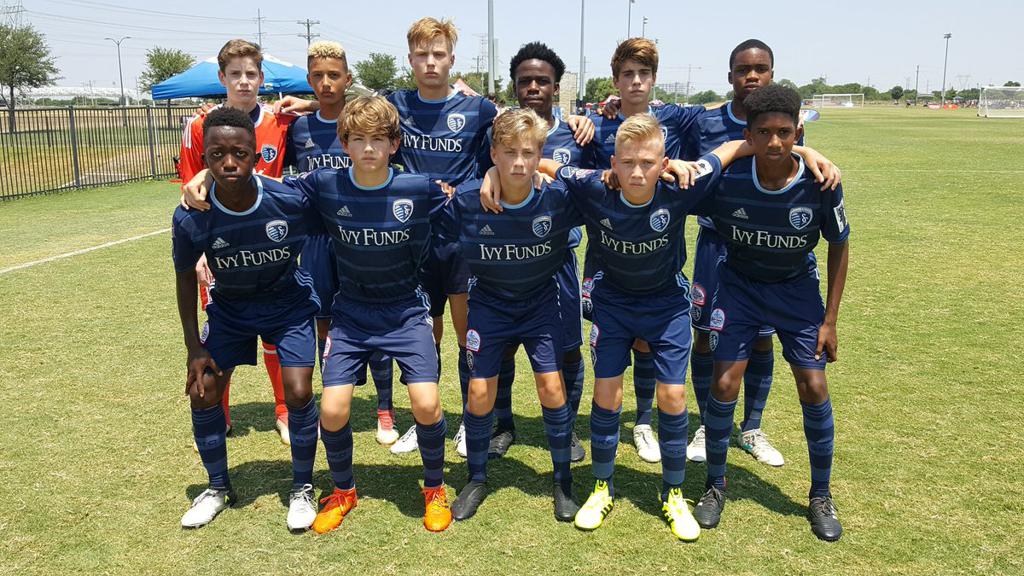 The Sporting Kansas City Academy U-14s have progressed to the semifinals of the 2018 US Youth Soccer National Championships at Toyota Soccer Center in Frisco, Texas.

Led by head coach Declan Jogi, the Sporting KC U-14s earned a second-place finish in Group A to secure a spot in Saturday's semifinal round alongside three of the top U-14 clubs in the country.

The semifinal showdown between Sporting KC and Michigan club Nationals Union Black will kick off at 7 a.m. CT Saturday with live updates provided on Twitter via @SKCAcademy. The winner will advance to the USYS national championship game versus either Real Jersey FC or ECFC Salinas United at 9:40 a.m. CT Sunday.

The U-14 Boys division of the USYS National Championships split eight teams into two groups of four, with Sporting KC needing to seal a top-two finish in the three-game round robin in order to advance to the semifinals. Victories in each of their first two group stage matches sealed the deal Jogi's side, who lost today to Real Jersey FC in a game that decided the winner of Group A.

The Sporting KC U-14s are one of three Kansas City-based clubs to reach the semifinal stage at the USYS National Championships in Frisco, joining the Soccer Nation Academy U-13 Boys and the FC Kansas City Blues U-17 Girls. Only two Kansas City teams have previously been crowned USYS national champions in the competition's 83-year history: the KC Dynamos Girls in 2001 and the Sporting KC U-15s in 2015.

Late-game dramatics engulfed Sporting KC’s first group stage contest against South Carolina club Mount Pleasant Premier. The sides looked destined to split the points as the match remained scoreless until the 69th minute — one minute shy of full time. Salat Mukoma spread the ball to Oscar LaOrden, who picked out Dalton Visconti inside the penalty area. The forward held off his defender and fired past the goalkeeper to give Sporting KC all three points.

Visconti found his scoring touch again on Wednesday, heading home a corner kick from Kelly Kipruto to give Sporting KC a 1-0 advantage after 22 minutes. New Mexico Rush equalized just two minutes later through Michael Wissman, but a final twist in the plot fell in Sporting KC’s favor. Mukoma was back to his playmaking ways in the 66th minute, finding Blake Craig with a pocket of space just outside the box. Craig unleashed a first-time strike into the corner, effectively punching his team’s ticket to the semifinals.

Thursday’s group stage finale would determine the first-place finisher in Group A, as Real Jersey FC had also won their first two games of the week. Sporting KC’s fortunes were reversed in a 4-0 loss as Real Jersey received a brace from Cade McGrath and further goals from Angus Kenson and Ryan Kuldanek.