"Anything But" with Gianluca Busio: On learning to drive, video game battles and traveling abroad 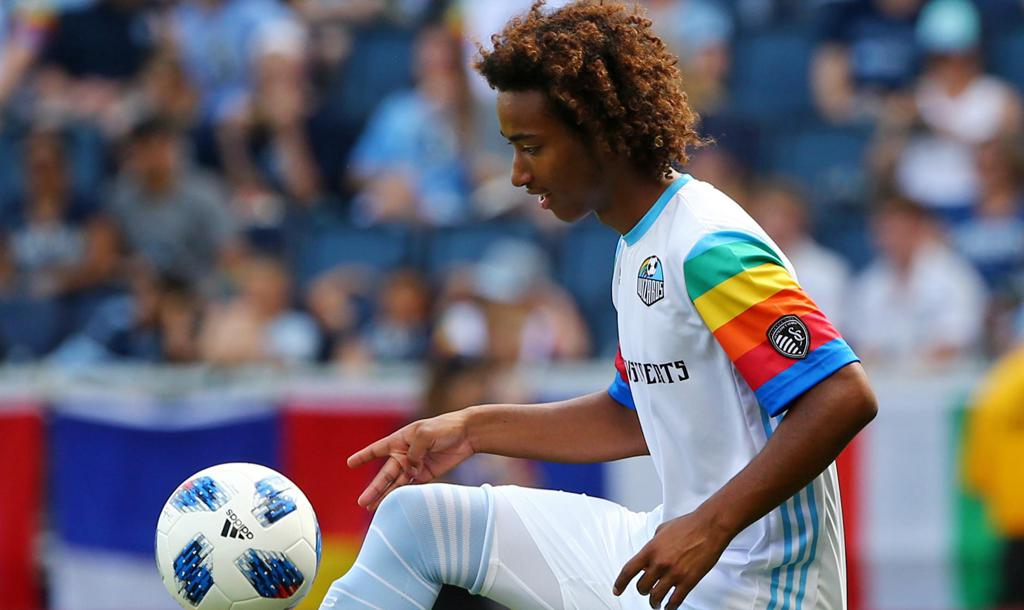 It's safe to say that homegrown midfielder Gianluca Busio is ahead of the curve. The talented U.S. youth international became the second-youngest player in MLS history last August when he signed with Sporting Kansas City at age 15.

Fast-forward to now, and the 16-year-old Busio already has a first-team match under his belt. He helped Sporting KC to a 2-0 win over Real Salt Lake in the U.S. Open Cup earlier this month and will aim to make further contributions to the first team as the 2018 campaign resumes.

In the newest edition of "Anything But," SportingKC.com chatted with the Sporting KC Academy product about his life off the field, where he only recently became a legal driver.

You just turned 16 years old on May 28. Did you do anything fun to celebrate the big day?

My whole family came in town for the weekend. We went out to TopGolf and played some golf, then went to eat at Strouds afterwards. My host family came out as well, so everyone was together and it was a really fun time.

How did driver’s education go? What’s your dream car?

So far, it’s not been bad. I just got my license so I’m now driving alone. It’s a little scary but I’m getting used to it. It’s getting fun, though! I live about 30 minutes away [from Pinnacle] so driving on the highway can be scary at times. My dream car would have to be some kind of BMW, obviously one of the more expensive ones. Probably an i8.

When you aren’t playing soccer, what’s your favorite thing to do in your free time?

Definitely video games. When I’m home, I'll always be playing video games because I’m too tired to do anything or get up. Right now I’m playing a lot of fortnight with my teammates and playing FIFA here and there. Jaylin [Lindsey] and I, we have a little competition going on. We play every couple of days and I’m winning right now.

Which club do you play with the most in FIFA?

I play with Manchester United, for sure. It’s not my favorite team. But on FIFA, I think they’re the best.

If you couldn’t be a professional soccer player, what occupation would you like to have?

I would probably say a hobby of mine since I’ve been little is cooking. So probably a chef. My mom has taught me to cook, starting with the basics like breakfast, but I like making pasta and pasta sauce.

As someone who takes online courses, what’s your favorite school subject?

I would say my favorite restaurant is back home in Greensboro, North Carolina, called Your House. It’s like an old, small diner that has really good food and no one really knows about it. My sister and I would always go later at night and get breakfast. My go-to would be the pancakes, they are huge pancakes and get a side of bacon with it. I usually just use syrup and always get blueberries or some fruit. It makes it a little healthier.

My favorite of all-time is Friends. I rewatch it all the time. Recently I just finished Money Heist. It’s about a bank robbery and a really smart guy who's behind it.

Before the game, I have a whole playlist and usually go through the same songs. But definitely Drake. And my other favorites are ASAP Rocky or Travis Scott.

Who’s the funniest teammate in the locker room?

Probably Johnny. I don’t think he’s the funniest, but he’s the most annoying. He’s always doing something different than everybody else.

What other soccer clubs and pro sports teams do you cheer for?

For soccer, I go for Inter Milan. It’s my dad’s team and I was raised into it. For basketball, I like the Houston Rockets because of James Harden. He’s my favorite player. If I support football, it’s the Carolina Panthers.

Aside from soccer, do you have any other hidden talents?

Outside of sports, I’m not that great at anything or at least I haven’t found it yet. I am fluent in Spanish. I’ve been speaking it my whole life and my school was taught in Spanish.

Probably Croatia. That was my first international visit. We were right beside a beach, so it was a really nice area. Apparently they are known for their beaches and people travel from Italy and Spain to go to the beaches there, so it was really nice.

Both of my favorite teams actually aren’t in it. Italy and the U.S. both didn’t qualify for it. So I don’t really have a favorite team. But from what I’ve seen, I think Spain will win it.

Your dad is Italian. Have you ever been to Italy?

Yes, I’ve been there a bunch of times. As a kid when I was really young, we would go for Christmas and summer for a month or two. I have two siblings, a brother and a sister, so as we grew older it has been harder to go with school and work. But we try to go every summer for about a month or so. My whole dad’s side of the family still lives there.

Dogs. I have a dog, but I’m not sure what breed he is, I think he’s a mutt. We rescued him from a shelter.