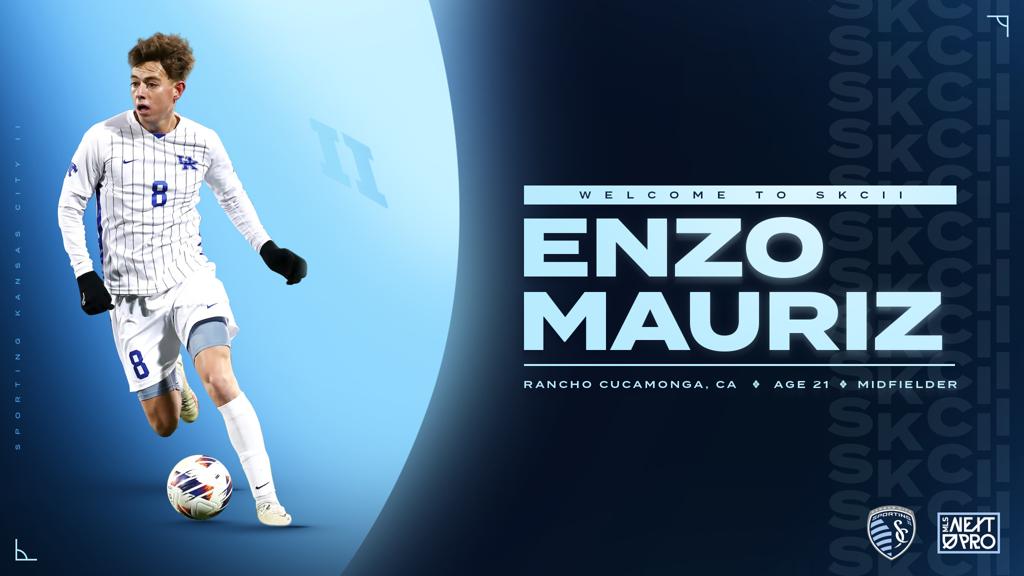 Sporting Kansas City Academy product Enzo Mauriz was announced today as the latest signing for Sporting Kansas City II ahead of the 2023 MLS NEXT Pro season. The 21-year-old midfielder inked his first professional contract following a three-year, standout career at the University of Kentucky.

Born and raised in Rancho Cucamonga, California, Mauriz joined the Sporting KC Academy ahead of the 2018-19 season and quickly became an important contributor for the U-19s. He scored his first Academy goal in a 2-1 win over national powerhouse FC Dallas in September 2018 and the following February was a member of the preseason training roster for Sporting KC II, formerly known as the Swope Park Rangers. He guided the U-19s to the U.S. Soccer Development Academy Playoffs in the summer of 2019 and committed his collegiate future to Kentucky in March 2020.

Mauriz started 45 of 59 appearances with the Wildcats, tallying eight goals and 11 assists while posting a 42-8-11 during his time with the program. The midfielder helped guide Kentucky to two conference tournament titles and a pair of runs to the NCAA Sweet Sixteen.

Capable of playing multiple midfield positions, Mauriz joins Sporting KC II on the heels of a spectacular junior season at Kentucky, where he tallied seven goals and five assists as a Sun Belt Conference First Team selection. Mauriz's seven goals all came in the final 14 games of the 2022 season, including a stunner against West Virginia in the Sun Belt Tournament semifinals on Nov. 9 that checked in at No. 3 on the SportsCenter Top 10 the following morning.

He started 20 of 21 appearances during the 2022 campaign last fall, helping the Wildcats to a 15-1-5 record, a second Sun Belt Conference championship and yet another run to the NCAA Tournament Sweet Sixteen.