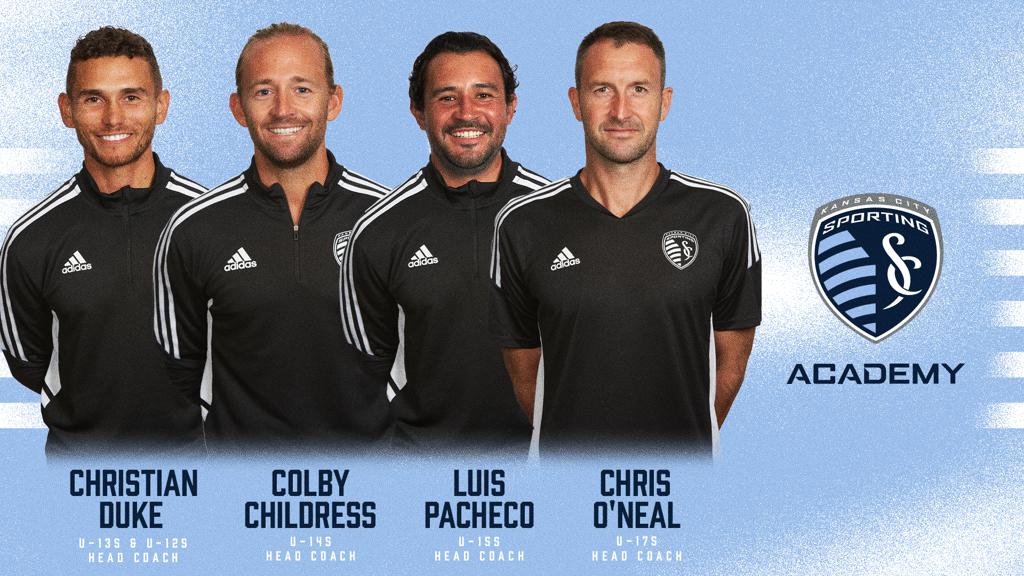 The Sporting Kansas City Academy has announced a head coaching realignment ahead of the 2022-23 MLS NEXT season.

Sporting KC Academy U-17 head coach Chris O’Neal, U-15 head coach Luis Pacheco and U-14 head coach Colby Childress have all transitioned to older age groups after serving as Sporting’s head coaches at the U-15, U-13 and U-12 levels, respectively.

Declan Jogi, who was announced today as the new Sporting KC Academy Director, will also serve as the club’s U-19 head coach. Additionally, former Sporting KC midfielder and Sporting KC II captain Christian Duke has joined the Academy technical staff as the new U-12 and U-13 head coach.

O’Neal will lead the U-17s after four successful seasons with the Sporting KC U-15s. He holds a U.S. Soccer A License and an Elite Formation Coaching License through the French Football Federation. His coaching journey includes previous stints as Director of Coaching for the Cincinnati United Premier Development Academy, Director of Vestavia Hills Soccer Club in Alabama and the Director of Southern Soccer Academy in Georgia. O’Neal has also coached at multiple training camps for the United States U-14 and U-15 youth national teams. He played collegiately at the University of Alabama-Birmingham and competed professionally with the Atlanta Silverbacks in the USL First Division.

Pacheco will oversee the U-15s after serving as Sporting’s U-13 head coach since 2017. He holds a U.S. Soccer A License and competed collegiately at the University of Louisville, helping the Cardinals reach the College Cup in 2010, before launching his youth coaching career in 2011. He previously spent seven seasons with Oldham Soccer Club in Buckner, Kentucky, coaching at the U-8 through U-16 levels while also holding Academy Director (2013-2016) and Technical Director (2016-17) roles at the club. He was also a volunteer assistant at Louisville from 2016-2017.

U-14 head coach Colby Childress has spent the last five years with the Sporting KC U-12s, who were notably crowned Generation Adidas Cup and Premier SuperCopa champions in 2018. He began his coaching career at Tennessee youth clubs Fusion FC (2010-2012) and FC Dallas TRI (2012-2013), then served as a graduate assistant coach at King University in Tennessee (2013-2014), Director of Operations for the Georgia Southern University men’s soccer team (2014-2016) and Technical Program Assistant for the Birmingham United Soccer Association (2016-2017). He played collegiately at King University from 2008-2012 and has a U.S. Soccer A License.

Duke, the newest addition to the Sporting KC Academy technical staff, is the older brother of current Sporting midfielder Cam Duke. The Overland Park, Kansas, native enjoyed a nine-year playing career in Major League Soccer and the USL Championship from 2013-2021, including his first two professional seasons with Sporting from 2013-2014 and two separate spells as captain of Sporting KC II in 2016-2017 and 2020-2021. The 2013 MLS Cup champion later led SKC II, formerly the Swope Park Rangers, to consecutive USL Western Conference championships in 2016 and 2017. Earlier this year, he had a brief stint with the Kansas City Comets of the Major Indoor Soccer League.

Prior to retiring as a player, Duke coached at Sporting Blue Valley and assisted at Sporting KC Academy training sessions while taking U.S. Soccer coaching courses. He began his post-playing career in early 2022, offering private soccer training to youth players across Kansas City.