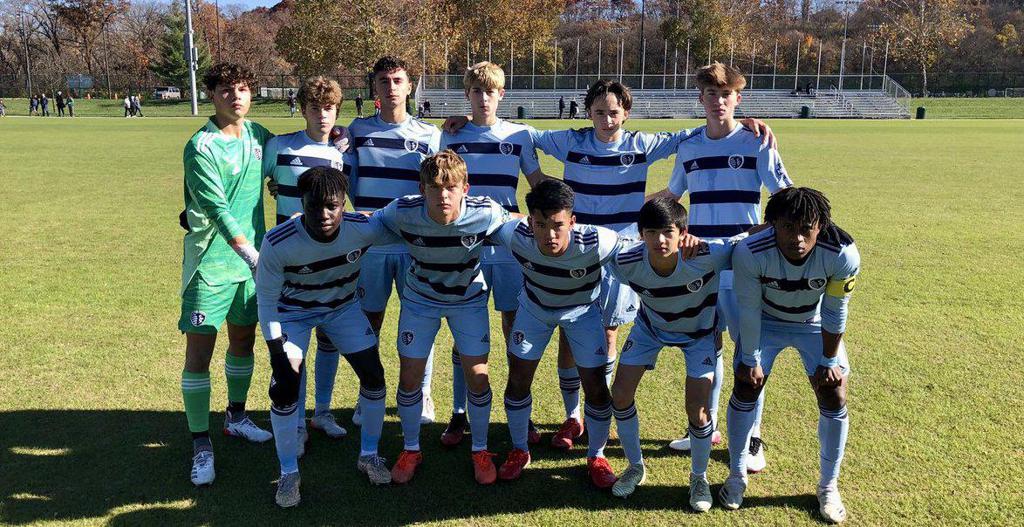 The Sporting Kansas City Academy went a perfect three-for-three on Saturday at Swope Soccer Village, collecting a treble of wins over the Rio Grande Valley Toros FC Academy as the 2021-22 MLS NEXT season continued.

The U-19s rolled to a 5-0 triumph, while the U-17s were equally commanding in a 4-0 victory of their own. The U-15s had a sterner test but nevertheless prevailed 3-1 thanks to an excellent second-half performance.

Led by head coach Rumba Munthali, the Sporting KC U-19s struck early and often in a comprehensive display against their Texas counterparts. The first punch was landed in the eighth minute when Camden Baker dashed down the left side and cut the ball back to George Medill, who picked out the corner to make the score 1-0. Near the half-hour mark, hat trick hero Dalton Visconti bagged his first of three goals on the day by heading home off a Daniel Gutierrez cross.

The U-19s were far from finished, with Baker assisting Visconti on another cross in the 66th minute. Seven minutes later, Visconti added his third on a clever assist from Gutierrez. The free-scoring forward then went from scorer to provider, setting up Zahir Dyke for Sporting’s fifth and final tally in the 80th minute.

Under the guidance of head coach and former Sporting Kansas City great Benny Feilhaber, the U-17s struck twice in both halves to finish four goals to the good. Guy Michaeli scored and assisted in the first 45 minutes, chasing a Jacob Bartlett long ball and finishing past the goalkeeper before providing an incisive pass to Thomas Mancuso, who doubled the advantage on 27 minutes.

Eight minutes into the second period, Nico Pendleton and Braxton Arpachinda combined cleverly on the left edge of the box before the former finished across the goalkeeper, firing a shot into the low right corner. Sporting would then notch their fourth with 71 minutes on the clock as Ryan Reid darted down the right flank and crossed low for Ozonna Ugbaja, who provided the finishing touch.

The Sporting KC U-15s remained deadlocked with Rio Grande Valley in a game that remained scoreless until the 60th minute, but head coach Chris O’Neal’s side caught fire over the final half-hour. Angel Franco struck the breakthrough goal on a Johann Ortiz assist, only for RGV to respond with an equalizer two minutes later.

Sporting saved their best for the final 20 minutes and retook the lead, with Ortiz poking home a rebound after Leo Christiano’s free kick was saved by the goalkeeper. Sporting then put the game out of reach in the 80th minute as Franco tallied his second goal of the day on a Trajan Wormington assist.

Up Next: Real Colorado on Saturday at Swope

The Sporting Kansas City U-19s and U-14s will return to Swope Soccer Village this Saturday, Nov. 20, hosting Real Colorado in an MLS NEXT doubleheader at 9 a.m. and 11 a.m. CT. Both matches are free and open to the public and fans can follow @SKCAcademy on Twitter for live updates.