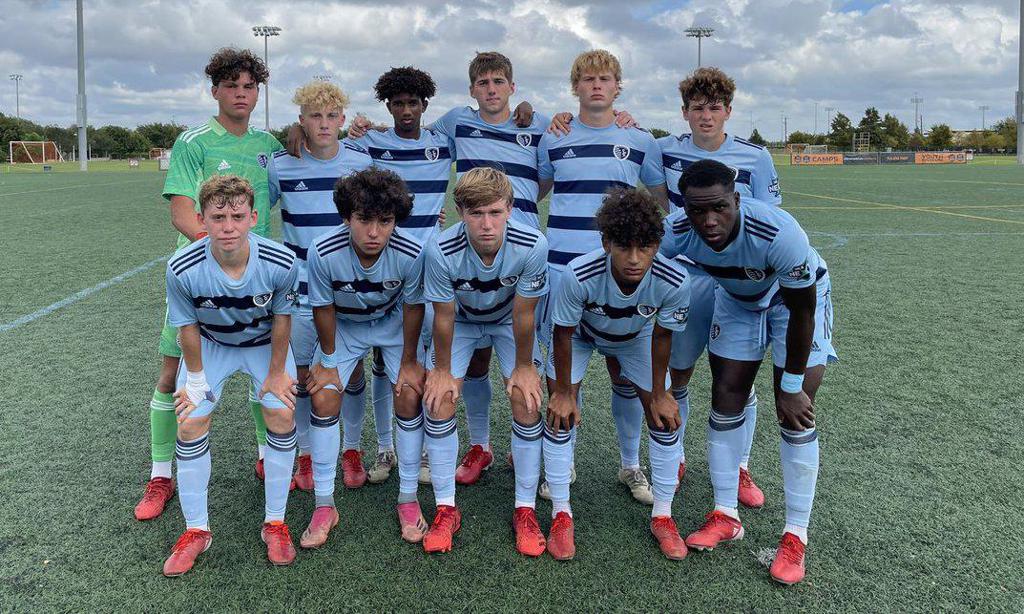 The Sporting Kansas City Academy enjoyed a successful road trip this weekend in Texas and Louisiana, combining for five wins and a Sunday clean sweep of Louisiana TDP Elite in Baton Rouge.

The U-15s led the way with a pair of shutout victories, including a hard-earned triumph against Houston-based RISE Soccer Club on Saturday, while the U-17s and U-19s also went unbeaten across two matches as the 2021-22 MLS NEXT campaign continued.

The U-19s opened the weekend with a 1-1 tie versus RISE Soccer Club, taking an early lead through George Medill before the hosts bagged a 25th-minute equalizer. Medill nearly restored Sporting’s lead near halftime, planting a powerful header goalward off a Braxton Arpachinda corner kick, but a defender was stationed for the goal line clearance to keep the game knotted at 1-1.

The U-17s followed suit with a 1-1 draw of their own and had to battle from behind after RISE took a 19th-minute lead. The elusive equalizer would come in the 79th minute when Naim Robinson, roughly 60 seconds after taking the field as a substitute, hammered home after the RISE goalkeeper could only parry away a long-distance shot Ryan Reid.

The U-15s collected Sporting’s lone win on Saturday, sealing their 1-0 result in the 44th minute as Luis Ortiz buried a penalty kick. The U-14s took a 2-1 loss, accounting for Sporting’s only setback of the weekend, with Chinelo Robinson finding the back of the net in the first half of a closely contested matchup.

The U-19s delivered a comprehensive performance on Sunday, prevailing by a touchdown margin with Dalton Visconti and Zion Long both finding the back of the net within 13 minutes. Sporting poured it on in the second half, with Medill striking in the 50th and 54th minutes before assisting Long’s second tally of the game on 63 minutes. Zahir Dyke notched a sixth goal in the 80th minute and Visconti rounded out the scoring three minutes from full time.

The U-17s were off and running within 10 minutes, building an early lead as Macielo Tschantret finished off a feed from Geremi Onentia. Shortly thereafter, Guy Michaeli made the score 2-0 with an excellent long-range strike before Louisiana TDP Elite grabbed a goal back at the 20-minute mark. Michaeli added his second of the day off an Arpachinda free kick near the half-hour juncture and Luke Reidell capped the scoring with a 72nd-minute tally on another Arpachinda assist.

The U-15s collected their second shutout victory in the space of 24 hours, posting a 3-0 result with a Johann Ortiz brace and a lake Leo Christiano strike. The U-14s also rolled in clean sheet fashion with a 5-0 triumph, putting an exclamation point on impressive weekend for the Sporting KC Academy.

Up Next: San Antonio FC at Swope

Three Sporting Kansas City Academy teams will return to Swope Soccer Village on Saturday, hosting the San Antonio FC Academy. The U-17s and U-14s will kick off at 9 a.m. CT, followed by the U-15s at 11 a.m. CT. Follow @SKCAcademy on Twitter for updates this weekend and throughout the season.