U-17s and U-19s play to high-scoring thrillers vs. Solar SC at Swope 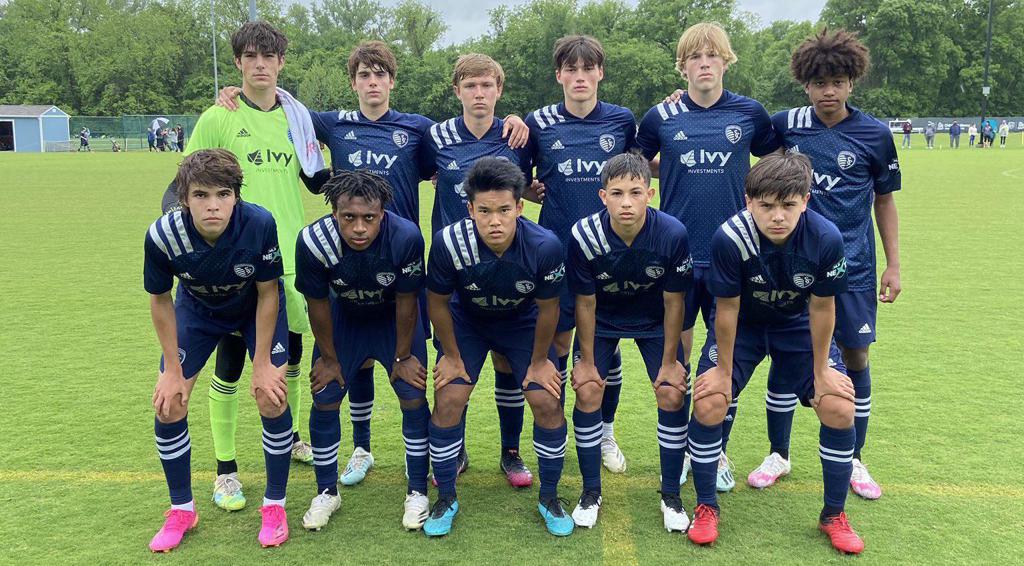 A pulsating day of MLS NEXT action unfolded Saturday at Swope Soccer Village as four Sporting Kansas City Academy teams continued their spring seasons against Texas club Solar SC. Head coach Rumba Munthali led the U-17s and U-19s to a pair of high-scoring results—the former prevailing 4-3 and the latter drawing 3-3—while the U-15s earned a shutout win and the U-14s took a narrow loss.

The Sporting KC U-19s (2-4-2) extended their unbeaten run in MLS NEXT to three matches in a six-goal barnburner that saw the hosts start brightly, relinquish a lead and then come back to salvage a point. Sporting rolled early, scoring inside three minutes when Zion Long hammered home after Dylan Hooper’s free kick deflected onto the crossbar. Ten minutes later, Alex Umana assisted Francisco Lopez to push the score to 2-0.

Solar responded impressively by scoring three goals in a 12-minute span on either side of halftime. Not to be denied a point, Sporting restored parity in the 75th minute when Daniel Gutierrez coolly buried a penalty kick in the final major moment of an entertaining 3-3 stalemate.

The Sporting KC U-17s (2-6-1) claimed their second win of the season in dramatic fashion, scoring twice in the final 10 minutes of a seven-goal slugfest. Jeremy Sharp fired the U-17s ahead in the 19th minute, cutting inside and bending a shot inside the far post, before Mataeo Bunbury gave chase to a Nati Clarke through ball and finished past the keeper.

Mirroring the U-19 matchup, the U-17s went ahead 2-0 before Solar SC bagged three consecutive goals in a spurt that stretched across both halves of play. After pulling one back on the half-hour mark, Solar equalized on 64 minutes and went in front in the 70th minute.

The final twist in the tale fell Sporting’s way, however, as Braxton Arpachinda picked out the bottom right corner for an excellent leveler in the 83rd minute. Only two minutes later, Bunbury notched his second of the afternoon by dribbling left and finding the back of the net for a deserved match winner.

The Sporting KC U-15s have built a 7-2-1 record on the back of impressive defensive displays, and Saturday’s performance was no exception. In a game that saw goalkeeper Misael Mena post the shutout, Sporting took their chance in the 57th minute when Macielo Tschantret assisted Edi Clark’s game winner in a hard-fought battle.

The Sporting KC U-14s (4-4-1) landed the first punch in the 20th minute when Carter Derksen’s terrific through ball found the feet of Anthony Jin, who split two defenders before finishing neatly past the goalkeeper. Solar SC stormed back in the second half, striking twice in quick succession to come away with a 2-1 win.

Up Next: Four matches at Swope on June 12

The Sporting KC Academy is off for the next two weekends and will return to MLS NEXT competition on June 12 at Swope Soccer Village when the U-15s, U-17s and U-19s host the Rio Grande Valley FC Toros Academy and the U-14s face Total Football Club. All matches will be free and open to the public.