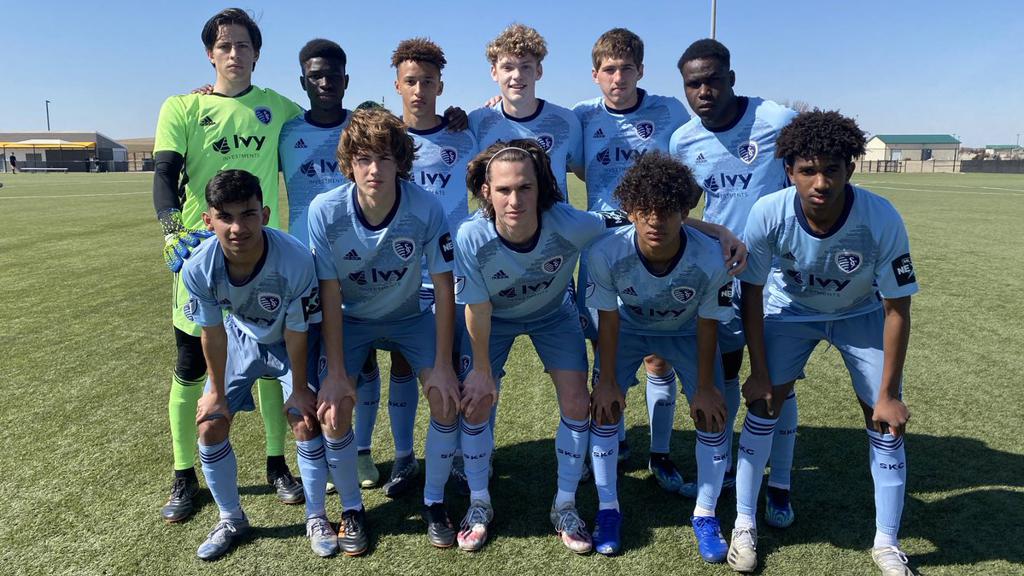 For the first time since November, four Sporting Kansas City Academy teams took the field Saturday for competitive league matches as the MLS NEXT spring season began in earnest.

Sporting and Real Colorado squared off in four consecutive matchups over the course of a busy afternoon at Fort Hays State University Soccer Stadium in Hays, Kansas. The Sporting KC U-14s and U-15s enjoyed winning starts with 2-1 victories, while the U-17s and U-19s took narrow 1-0 defeats.

On the heels of a successful 2020 fall campaign, the U-14s earned a hard-fought 2-1 triumph in the nightcap of the quadrupleheader to give Sporting and Real Colorado two wins on the day.

The U-15s, who were crowned US Youth Futsal Regional champions last month, replicated that scoreline with an impressive comeback after Real Colorado surged ahead in the 23rd minute. Geremi Onentia buried a penalty kick to tie the score at 1-1 on the brink of halftime before converting another penalty to win the game in the 64th minute. Goalkeeper Carlito Saylon made a brilliant save in the final moments to help preserve the result.

The U-17s were unlucky not to come away with a point in their scrappy showdown against Real Colorado. Sporting threatened twice in the first half, with Braxton Arpachinda’s free kick fizzing narrowly wide in the 15th minute and Zahir Dyke firing inches over the bar after running onto a Jeremy Sharp through ball. Real Colorado struck seconds before halftime, giving Sporting a 1-0 deficit that would stand until the final whistle.

In the opening match of the afternoon, the U-19s were locked in a cagey battle that saw both sides defend well and limit high-quality scoring opportunities. Real Colorado would land the decisive punch in the 57th minute with a successful penalty kick, and although Sporting applied pressure in the dying embers of the game, they fell short in their bid for an equalizer.

Five Sporting KC Academy sides will return to Hays next weekend for a slate of matches against fellow MLS academy Colorado Rapids. The U-15s, U-17s and U-19s will compete on Saturday, while the U-13s and U-14s will take the field on Sunday. Follow @SKCAcademy on Twitter for live updates next weekend and through the MLS NEXT spring season.