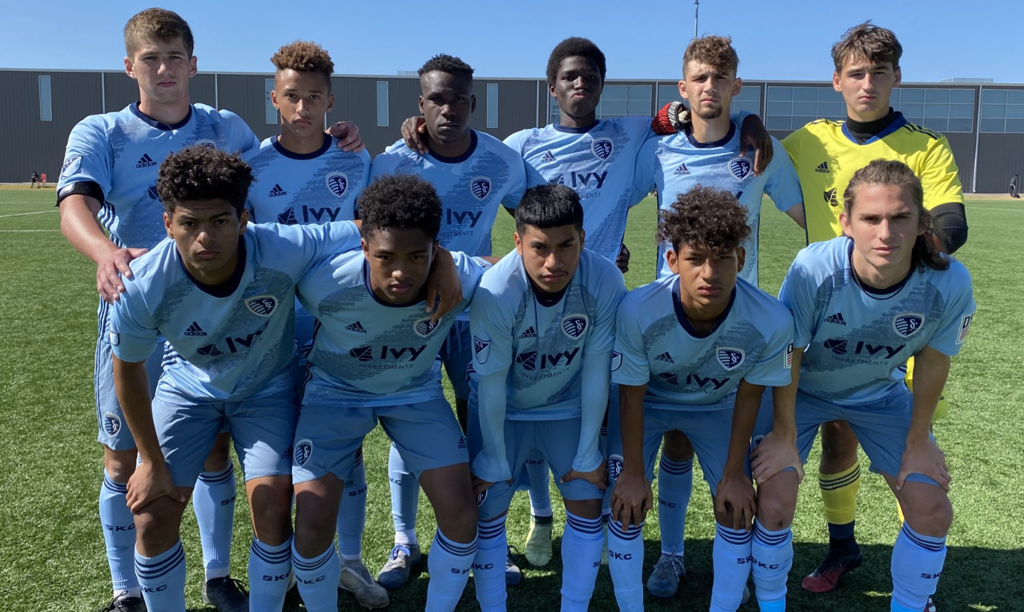 Four Sporting Kansas City Academy teams took the field Saturday afternoon to battle perennial powerhouse FC Dallas at the Titan Sports and Performance Center in Tulsa, Oklahoma. While the U-19s, U-15s and U-14s all took narrow defeats, the U-17s sprung a dramatic victory of their own in a competitive day of MLS NEXT action.

The Sporting KC U-17s led the way with an impressive 2-1 victory, taking their MLS NEXT record to 3-1-1 on the season. The first major moment came in the 30th minute when Jack Sartino thought he had given Sporting the lead, but the goal was disputably called back for offside. Head coach Rumba Munthali’s side wouldn’t be denied on the stroke of intermission, however, as Daniel Gutierrez picked out the upper left corner on a wonderful strike in the 45th minute.

FC Dallas replied with an equalizer in the early stages of the second half, leaving everything to play for over the final half hour. With 70 minutes on the clock and the score deadlocked, Jayvin Van Deventer made the difference by smashing home what ultimately stood as the match-winner. Sporting saw out the final 20 minutes by keeping FC Dallas at bay to secure the win.

The Sporting KC U-19s dropped to 3-3-0 on the season in a game that saw Dallas score the decisive goal after 18 minutes. Goalkeeper Tommy Williams made a handful of strong saves to keep his side close, and although the likes of Ozzie Cisneros and Zion Long propelled Sporting in the attacking third, Dallas preserved their clean sheet to the full-time whistle.

The Sporting KC U-15s entered Saturday with just one goal allowed through their first five MLS NEXT matches, but slipped to a 1-0 defeat this time around as their record dropped to 3-2-1. Goalkeeper Carlito Saylon was tested throughout the afternoon and produced an excellent stop in the 25th minute before turning away a penalty kick in heroic fashion a few minutes before halftime.

The contest remained scoreless until Dallas found a breakthrough in the 63rd minute. Although Sporting pushed forward in search of a late equalizer, the Texas outfit would emerge unscathed to take all three points.

It didn’t take long for fireworks in the Sporting KC U-14s’ showdown, as FC Dallas took a fifth-minute lead before Luis Ortiz bagged an superb equalizer two minutes later. By the 12th minute, Sporting took a 2-1 lead thanks to Anthony Jin, who ran onto a pass from Ortiz and finished coolly past the goalkeeper. Dallas restored parity at 2-2 by the 15th minute, capping a wild first quarter-hour of action, and would later notch the game-winner in the 77th minute.

Five Sporting Kansas City Academy clubs will travel to Hays, Kansas, next weekend to meet the Colorado Rapids at Fort Hays State University Soccer Stadium. The U-19s, U-17s and U-15s will take the field on Saturday, while the U-U-14s and U-13s will be in action on Sunday. Follow @SKCAcademy on Twitter for updates next weekend and throughout the MLS NEXT fall season.