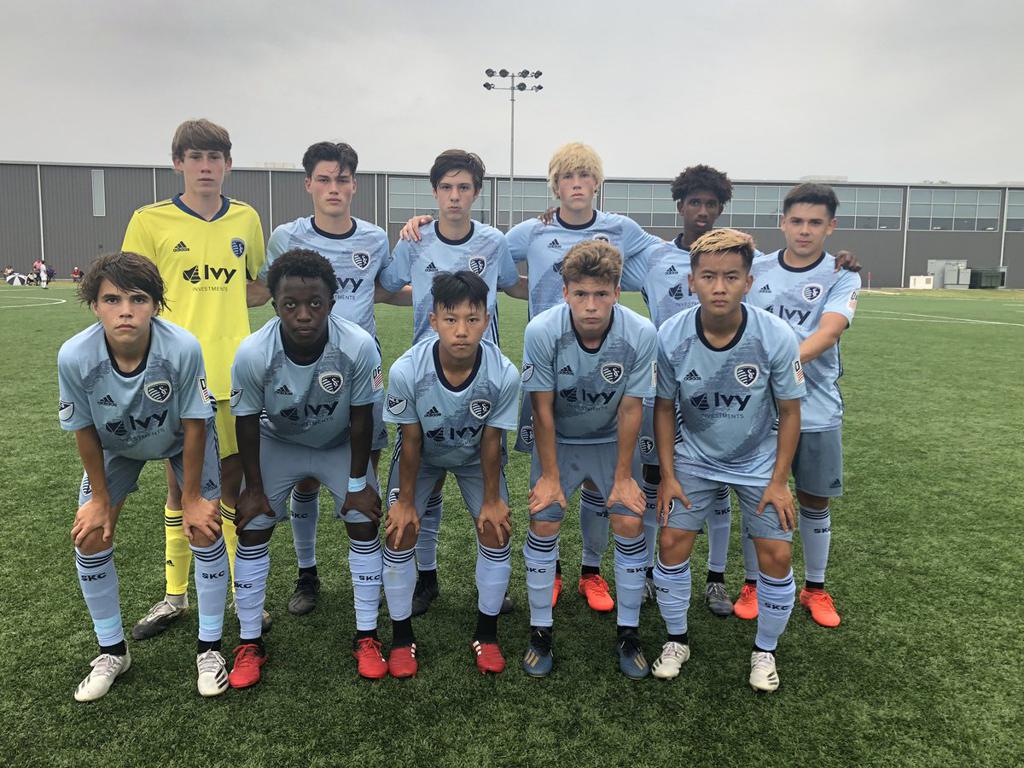 Six Sporting Kansas City Academy teams took the field Sunday against Dallas-based Solar SC at Titan Sports and Performance Center in Tulsa, Oklahoma, marking the continuation of the inaugural MLS NEXT fall season. By the end of the day, Sporting had plenty to feel good about as the club posted a 4-1-1 record highlighted wins for the U-17s, U-16s, U-15s and U-12s.

The strong showing came three days before Audi and Bleacher Report drop Episode 2 of “THE ACADEMY,” a five-part docuseries chrolicling the Sporting Kansas City Academy that will debut this Wednesday, Sept. 30, at 1 p.m. CT via @brfootball on Twitter and bleacherreport.com.

The U-19s accounted for Sporting’s lone defeat of the afternoon, suffering their first loss of the season after opening the campaign with consecutive wins.

Solar SC were awarded a penalty kick midway through the first half, but goalkeeper Mason Hart keep his side level by sprawling out at full extension to produce a splendid save. Just shy of the half-hour mark, Sporting would take the lead on a long-distance stunner from Lex Dadmun, who picked out the top corner from beyond the box.

The U-19s carried their 1-0 advantage into the second half, but Solar SC rallied to equalize and eventually conjured an 82nd-minute winner to seal all three points. Sporting pressured late in a bid to salvage a result but fell narrowly short in a delicately poised battle.

The Sporting KC U-17s pushed their MLS NEXT record to 2-0-0 with a well-balanced 2-0 win, landing the first punch in the 27th minute when U.S. youth international Ozzie Cisneros played a brilliant through ball for Zahir Dyke to smash past the Solar SC goalkeeper.

Cisneros went from provider to goal scorer in the 70th minute, finishing off a well-worked attacking move to seal the comfortable triumph.

Following in the footsteps of the U-17s, the U-16s also stayed unbeaten by scoring twice on either side of halftime to improve to 2-0-1 on the year. The breakthrough goal came in the 18th minute when Manuel Romero’s shot deflected invitingly into the path of Jeremy Sharp to slot into the back of the net.

On the cusp of halftime, Kelly Kipruto won a penalty and Jack Lucas converted from 12 yards to double Sporting’s cushion. Solar grabbed a goal back in the second period, but Sporting struck twice more—including a 73rd-minute tally from Jacob Thao—to cement a well-deserved victory.

The U-15s became the lone Sporting KC Academy team with a perfect 3-0-0 record by sinking Solar to the tune of a 2-0 scoreline. Elsewhere, the U-12s claimed an exciting 3-2 victory and the U-13s settled for a 1-1 stalemate.

Up Next: Saturday vs. Shattuck-St. Marys’

Four Academy teams are scheduled to resume their MLS NEXT campaigns on Saturday against Minnesota-based Shattuck-St. Mary’s at James Cownie Sports Complex in Des Moines, Iowa. The U-16s and U-19s will kick off at 1 p.m. CT, followed by the U-17s and U-15s at 3 p.m. CT. Follow @SKCAcademy on Twitter for live updates this weekend and throughout the MLS NEXT season.