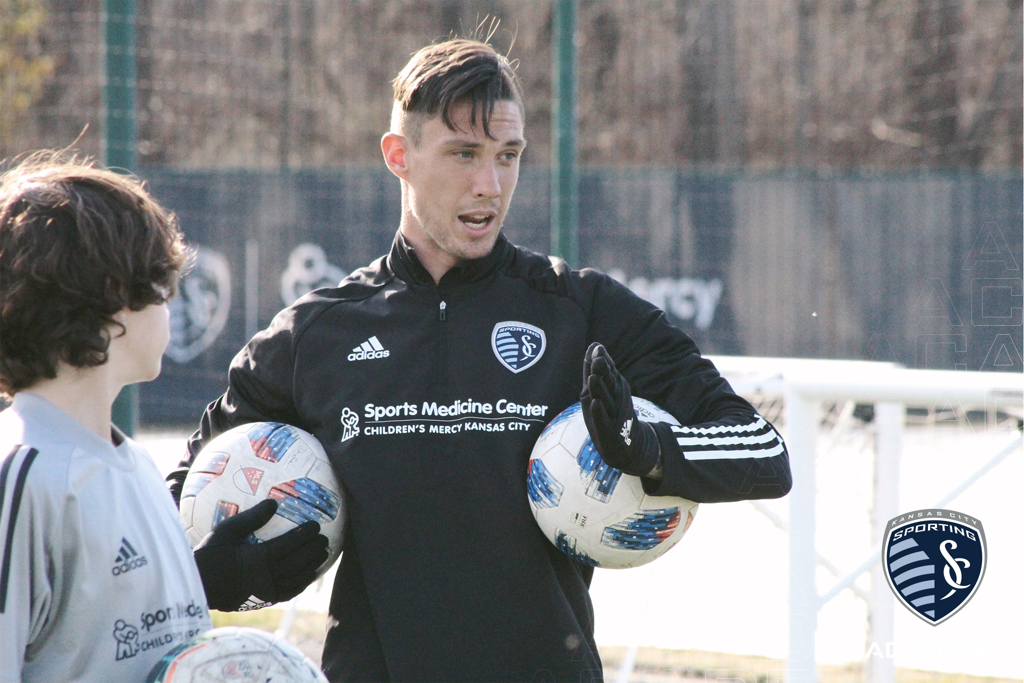 Sporting Kansas City Academy goalkeeper coach Darrin MacLeod enjoyed a heralded playing career at Drake University before turning professional in 2017 with Sporting Kansas City II. He spent two seasons with the USL Championship club prior to his transition into coaching.

We catch up with the Academy’s goalkeeper coach in the space below.

Why did you gravitate toward the goalkeeping position as a player?

I started playing recreational soccer when I was 4 or 5. When I was 10, I got recruited from one of our local competitive teams. That’s when I started to play one half in goal and one half out on the field. By age 11, I functioned as a goalkeeper. I liked to be farther up and liked other positions as well, but goalkeeping stuck with me. I guess being tall helped in that, too. In goalkeeping, I liked the idea that you were involved with a lot of different situations and it was a challenge. It’s a different position, and as a kid, I enjoyed diving around and doing different actions like that, so goalkeeping stayed.

Did you have an icon that you looked up to in goalkeeping?

Yes, growing up I went to the Newcastle United Academy in England when I was 11. At that time, it was Shay Given who was the goalkeeper there. When I saw him train, it was definitely a game-changing experience for me since I was always a fan. I started watching Newcastle from a younger age and Shay Given made an impact on me for sure.

Now you’re back with us at Swope Soccer Village after playing two seasons for Sporting KC II. Tell us a little bit about that feeling of coming back, but with a new start.

It’s exciting and obviously a different role than I’m used to. I always knew that I wanted to get into coaching. I felt that at this point of my career, with the opportunity that was presented, it made sense to make the transition. I played here for two years and I loved the club. It’s very special to me. We made the playoffs both years when I was there, I got opportunities to train with the first team and it was definitely a positive experience for me. The way it’s organized, the level of professionalism, made my decision obvious when (Academy Director) Jon Parry asked me to join. I knew the culture of the club, I know the staff and what the expectations were, so from that standpoint it made a lot of sense.

Coaching has been great so far. I enjoy being with the kids and they show a lot of potential. Even when I was here as a player, I helped with the Academy, so I got to know a few players and developed a good relationship with some of the players here and we kept in touch after I left.

What do you think of the Academy system now that you are part of it?

The resources that these kids have is unbelievable. To travel all over America and have the best coaches and facilities to train at is just an amazing opportunity. It’s more than anything I’ve ever seen from when I was in the Toronto Academy system, and it’s not even a 10-years difference.

What’s your favorite part about coaching so far?

I just like the idea of being able to shape young goalkeepers, and you can directly see them progressing even in this first month of me being here. You can see little incremental improvements as you go along, so it’s really interesting to not only look at how they improve, but to see the kids try to break down on why this or that goes wrong and what can they do about it to help them in game situations. Goalkeeping is definitely a position which has so many elements to it that you constantly have to make quick decisions. That is definitely a challenge, but each kid is different with their strengths and weaknesses. It’s almost like finding a unique plan for them and bringing them all together as a group as well.

What would you say your coaching philosophy is?

It’s probably the English philosophy in goalkeeping, but I try to not limit it to a certain philosophy. I take a lot of from my experience. I had a lot of goalkeeping coaches—some that I liked, some that I didn’t like. The main focus for me is the demeanor of how you present the information to the kids. Based off my career, I ty to implement the positive things into my coaching with brining my ideas to the table. I also have a similar aspect to goalkeeping to Alec Dufty, the goalkeeper coach of Sporting’s senior team. My demeaner is very similar to his.

Goalkeeping is more than just being a trainer. The position has so much to do with a lot of things psychologically, and that brings you back to the communication and the importance of how you present yourself. With the technique on the field, you have to demand things on the highest level. At the same time, they are developing which means that sometimes you need to put your arms around them and to make sure they know that I’ve been there, too, and they can turn to me for advice. We coach them, of course, but at the end of the day we are a family.

How do you create a welcoming atmosphere for the kids?

There are things that the kids can’t control, and that’s why the psychological aspect is important to me to implement this year. Each week looking at how we trained and having discussions together about things with the kids is essential for their growth. Goalkeepers are like a small family within the team, and at the same time, you all compete against each other. For me, it’s important to make the training environment enjoyable. You are trying to help each other to get better and if you are not trying to make your teammate better, than he’s not going to make you better. It’s important to acknowledge that even if they are all fighting to be the first goalkeeper, it’s always team first.

Do you have a favorite club besides Sporting KC?

In Europe I still support Newcastle, even though it’s hard sometimes to get your expectations out of them. But they have been special to me from a young age and I continue to follow them.

Do you have a passion outside of soccer?

I enjoy cooking! I think it’s from being on my own from age 18 when I left for college and then obviously playing professionally and now into coaching. Ever since that age I had to cook for myself, so I enjoy learning new things and playing around with different recipes.

Do you have a favorite area or place here in Kansas City?

Restaurant-wise, I think one of my favorites is Lidia’s, an Italian place in the Crossroads. But I like barbeque too—it’s the best here in Kansas City and I want to make the time to check out some of them.