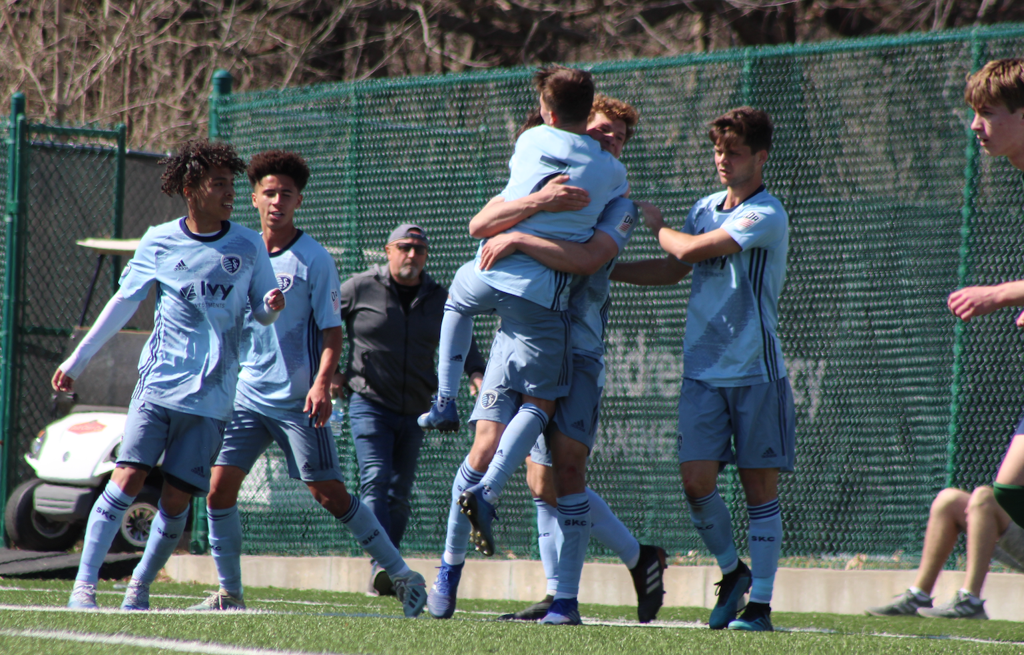 The Sporting Kansas City U-19s stayed unbeaten in the U.S. Soccer Development Academy with a hard-fought 1-0 victory over rivals Saint Louis FC on Sunday afternoon at Swope Soccer Village. Mason Leeth's towering header in the 56th minute was the difference maker in a hotly contested battle that saw head coach Rumba Munthali's side improve to 6-0-3 and extend their lead atop the Frontier Division to six points.

The U-19s fielded a strong squad with Sporting Kansas City homegrown duo Cameron Duke and Tyler Freeman as well as Sporting KC II's Jahon Rad and Brooks Thompson among the starters. Thompson's biggest contribution came just nine minutes into the game when he saved a penalty kick to keep Saint Louis FC off the scoresheet.

Rad and U.S. youth international Tucker Lepley both went close before halftime, only to see their shot attempts narrowly miss the target. Lepley's inch-perfect free kick 11 minutes into the second half proved pivotal, as Leeth leapt high at the far post and nodded past the Saint Louis FC keeper to give the hosts a 1-0 advantage. Sporting would hold their lead until the final whistle, navigating the waters of an increasingly chippy affair that produced three red cards. Postgame reaction from U-19 players can be found below. 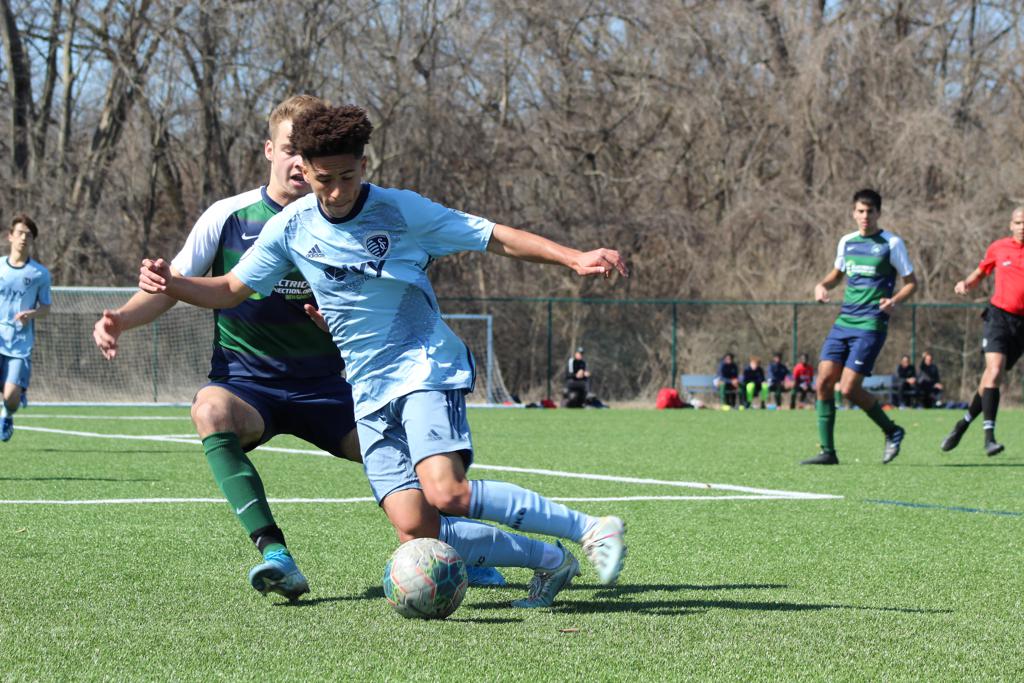 “We obviously got the win and that’s the most important thing. We did everything that we’ve been working on in training throughout the first team, second team and the Academy. I think we executed everything very well as far as pressing goes and how we want to play, so I think overall it was a good day for us. I think we could have been a little cleaner at times, but overall I think we did well and I was just happy get the win.”

“It was really good to be back on the field with the Academy and playing at a high level. We had a lot of Homegrowns that came down to play today. It was a good game and very physical. Saint Louis FC is a very physical team that tried to get into our heads a lot, but we managed it. This is a strong group and we all connected pretty well with each other today. A lot of the U-19s train with Sporting KC II and the first team, and that definitely shows at these games.

“I thought I played well, but the wind was difficult to deal with in the first half on my end. On the penalty, I went the right way and they hit it at right at me, so it all worked out. Overall it was a good performance from everyone.”

“I think we are starting to develop a rivalry with Saint Louis, which makes the games against them that much more competitive, which I love. It’s awesome to play with the Homegrowns because it shows that the path to the first team from the Academy is real, and being teammates with them shows you the standard that you have to reach toward every day to get to where they are at.

“On our goal, we had an angled free kick and I love to provide the in-swinging service on them. Before the play, Mason told me to find him at the back post because he was beating his man and he was right where he said he would be to head it in.

“It was a positive result for the team, but there is a lot for us to keep improving on for the rest of the season. The whole team has a family bond and I think that helped us at the end of the game, to just give it all for each other to secure the three points and keep the clean sheet. We all need to put this result behind us and work in training this week because we have a massive home game vs. FC Dallas on the weekend.”

“As a team we were much better than the score reflects. We possessed the ball for a majority of the game and created goal scoring chances. It’s always fun when Homegrowns come down to play with us. They are able to hop into the team and have an immediate chemistry. My goal came off of a set piece. Tucker Lepley served the ball to the back post where I was able to get my head on it and score.” 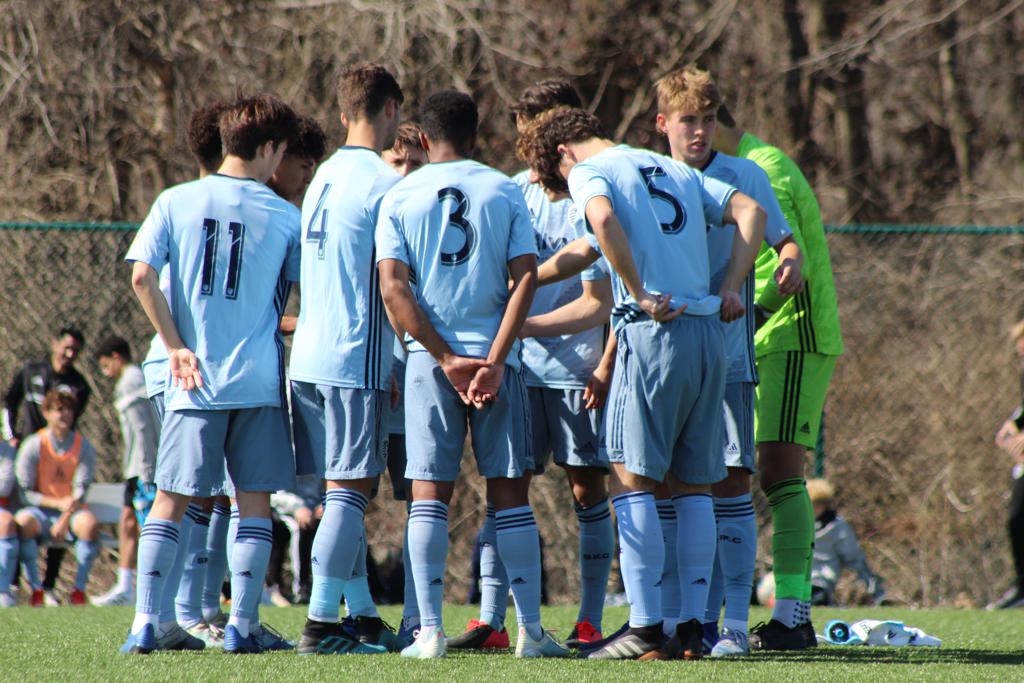 The Sporting KC U-17s and U-15s were also in action this weekend, traveling south to face the Dallas Texans in a Saturday doubleheader at Arlington Heights High School. The U-17s secured a 2-1 win, receiving goals in either half from Alex Umana and Edward Mendy to improve to 3-4-1 in the Frontier Division. The U-15s took a 2-1 loss with a first-half goal scored by Ryan Reid, falling to an identical 3-4-1 record in the regular season.

Next Up: Saturday Tripleheader at Swope

Three Academy teams will resume their U.S. Soccer Development Academy seasons on Saturday, hosting FC Dallas in a tripleheader at Swope Soccer Village. The U-15s will take the field at 9 a.m. CT, followed by the U-17s at 11 a.m. and the U-19s at 1:30 p.m. All Academy matches at Swope Soccer Village are free and open to the public. Follow @SKCAcademy on Twitter for live updates throughout the day.