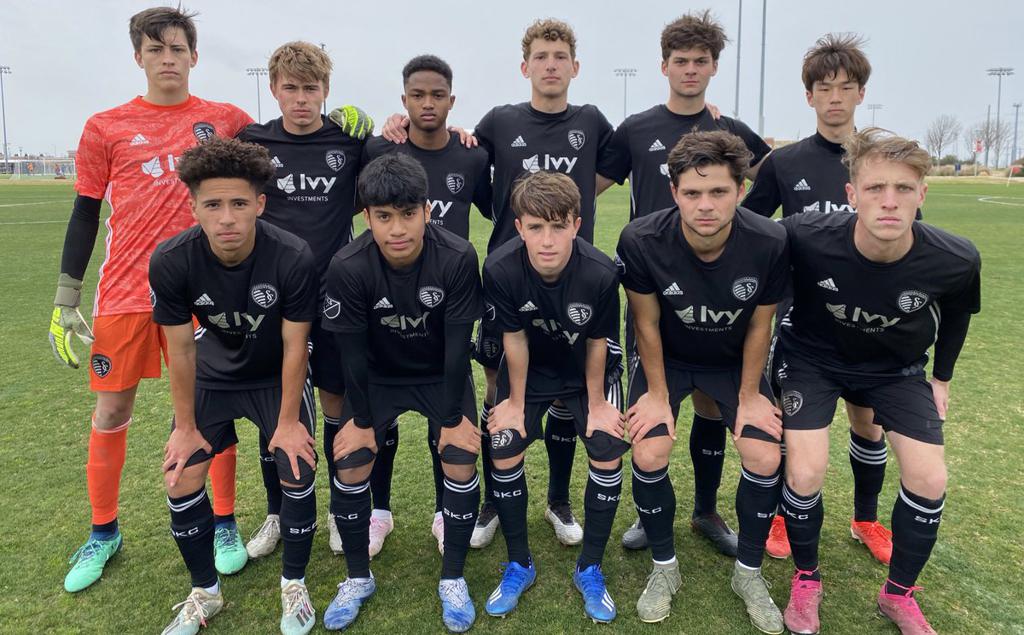 After participating in a series of high-profile national competitions during the winter months, the Sporting Kansas City Academy U-19s, U-17s and U-15s finally resumed their 2019-20 U.S. Soccer Development Academy regular season campaigns this weekend with a pair of doubleheaders in the state of Texas against Solar SC and FC Dallas.

Playing their first league matches in three months, the U-19s (5-0-3, 18 points) remained unbeaten in the Frontier Division after prevailing 2-0 against Solar SC on Saturday and perennial powerhouse FC Dallas on Sunday. The U-17s (2-4-1, 7 points) were less fortunate, taking two losses, while the U-15s (3-3-1, 10 points) came out as winners and losers in consecutive 3-2 thrillers.

Led by head coach Rumba Munthali, the U-19s enjoyed a successful return to the pitch on Saturday with a well-rounded 2-0 triumph. Arnold Castillo opened the scoring in the 45th minute and standout midfielder Cameron Duke, who had spent the previous month in Arizona training with the Sporting KC first team, sealed the result with an 82nd-minute strike. Just three days earlier, Duke had logged 60 minutes in Sporting’s preseason contest against Phoenix Rising FC.

The U-19s carried their momentum into Sunday for a heavyweight clash against FC Dallas, which also entered the game unbeaten in league play. A tightly contested battle was ultimately decided in the 30th minute when Josh Chong latched onto a cross from Mason Leeth and finished coolly. Isaiah LeFlore added icing to the cake on an 87th-minute goal as Chong turned from scorer to provider. At the opposite end of the field, goalkeeper Max Trejo stood strong between the posts for his second clean sheet in as many days.

Just five days removed from competing at Generation adidas Cup qualifying in Carson, California, the U-17s showed signs of fatigue in back-to-back defeats. U.S. youth international Kayden Pierre fired Sporting into an early lead on Saturday against Solar SC, but the defending Development Academy national champions at the U-17 level responded with five unanswered goals to claim the win. FC Dallas would hand Sporting another setback in a 3-0 decision on Sunday.

The U-15s experienced both sides of 3-2 results this weekend, falling short on Saturday before bouncing back on Sunday. Sporting twice took the lead in Saturday’s narrow loss, receiving goals from Nicholas Pendleton and Matthew Fisher, only to relinquish their winning position in a back-and-forth encounter.

The script was flipped on Sunday as the U-15s twice fell behind, only to stage a late and dramatic rally to grab all three points. Braxton Arpachinda leveled the score at 1-1 on the half-hour mark and Pendleton scored for the second straight game to make it 2-2 after 60 minutes. With all to play for in the dying embers, Thomas Mancuso bagged the all-important winner shortly before the full-time whistle to clinch the admirable comeback.

All three Academy teams are off next weekend and will continue their Development Academy campaigns a fortnight from now. The U-15s and U-17s will travel south to visit the Dallas Texans in a doubleheader on Saturday, March 7, kicking off at noon and 2 p.m. CT, respectively. The Sporting KC U-19s, meanwhile, will host Saint Louis FC on Sunday, March 8, in a noon CT kickoff at Swope Soccer Village. Admission to the match is free and open to the public.