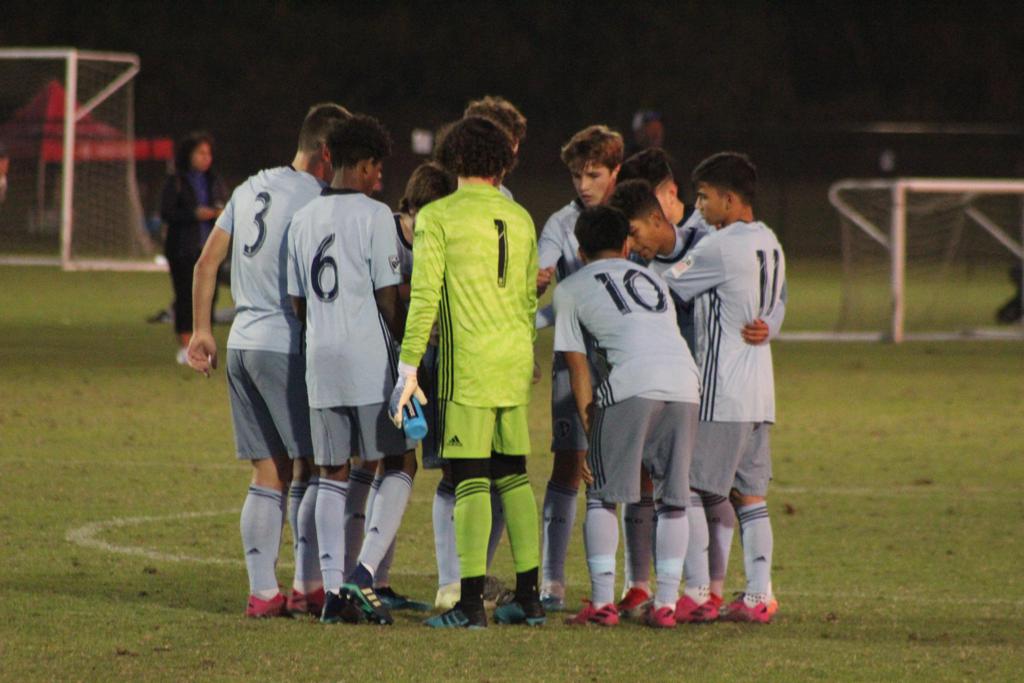 The Sporting Kansas City Academy U-17s finished atop Group H of the DA Winter Cup this weekend to clinch a spot in the Development Academy Spring Cup Championship, which will take place in spring 2020.

A third-place finish in the Fall Group Stage of the inaugural DA Cup was enough to send Sporting to the Winter Cup at Premier Sports Campus in Bradenton, Florida. The event consisted of 32 academy teams split into eight groups of four, with the first-place team in each group punching a ticket to next year’s Spring Cup Championship.

Head coach Rumba Munthali’s men were slotted into Group H and navigated a three-game schedule unbeaten, drawing Baltimore Armour and Real Salt Lake before claiming a dramatic win over Florida club Weston FC on Sunday to finish atop the group.

Sporting and Real Salt Lake finished with identical 1-0-2 records, but Sporting’s plus-two goal difference eclipsed RSL’s by a single goal and proved all the difference as the U-17s closed out the fall portion of their 2019-20 season in thrilling fashion.

Sporting opened their Winter Cup campaign against a Baltimore Armour side that scored inside five minutes and salvaged a last-gasp equalizer just before full time. The U-17s otherwise enjoyed the lion’s share of possession and struck twice through U.S. youth international Rokus Pukstas.

The attacking midfielder first struck in the 33rd minute, capitalizing on a failed clearance following Osvaldo Cisneros’ set piece to draw Sporting level. Pukstas then fired his side ahead in the 84th minute, finishing with aplomb after Kayden Pierre delivered a pinpoint cross from the wing. Baltimore’s late leveler ensured both teams a sharing of the spoils.

Rokus Pukstas on the ball for the Sporting KC U-17s

A cagey and competitive battle against rivals Real Salt Lake produced no goals, but both sides conjured plenty of chances only to be thwarted by exemplary goalkeeping. Gavin Krenecki recorded the clean sheet for Sporting, making a slew of saves to keep RSL off the scoreboard. On the offensive end, Pukstas, Cisneros, Coby Jones, Zion Long and Daniel Gutierrez all came close to finding the back of the net.

Sporting entered Sunday’s finale tied for second in Group H, level with RSL on two points and two points behind leaders Baltimore. Thanks to RSL’s 2-1 win over the Armour on Sunday, the U-17s would guarantee first place in the group by defeating Weston FC by two or more goals.

Sporting wasted no time landing the first punch as Dylan Hooper won his team a free kick on the left wing. Cisneros swung it into a crowded penalty area and Pukstas smashed a wicked side volley past the keeper to make the score 1-0.

Munthali’s side clung to their narrow lead until the 80th minute when Weston equalized. The costly concession made it 1-1, and such a result would have dropped Sporting to third place in Group H.

“Our mindset was that we had to score at least one more goal to go through for sure, but after Weston equalized, we now needed two more goals,” said U-17 forward Alex Umana. “Even though they scored, our mindset never changed and we strived to get those goals to secure the first place spot.”

Undeterred, Sporting struck in the 86th minute to reclaim their slender advantage. Michael Lenis charged into the box and delivered a perfect pass to Umana, who made no mistake with an excellent finish. The all-important third goal, which ultimately lifted Sporting above RSL on goal difference, came just one minute later as Umana ran onto a long ball and poked home to seal a 3-1 victory and lift Sporting to the summit of Group H.

“The team was motivated from the start because we knew we wanted to make it to the next round in the spring,” Umana said. “The intensity and desire to win was there throughout the whole game, our mistakes were minimized, and we finished our chances.”

Osvaldo Cisneros on the ball for the Sporting KC U-17s

While the U-17s competed in the Winter Cup, the Sporting KC U-15s had also traveled to Bradenton for three friendly matches to close out the fall portion of their 2019-20 Development Academy campaign.

The U-15s earned a 1-0 win over Inter Miami CF on Thursday, using a Jacob Bartlett goal to secure all three points. A 2-0 defeat to Atlanta United FC on Saturday was washed away with a thrilling penalty shootout victory over Orlando City SC on Sunday morning. After falling behind 2-0, Sporting responded with a Nicholas Pendleton brace to force penalty kicks. The U-15s prevailed 4-2 in the shootout to end 2019 on a triumphant note.

"Overall, this weekend was a great experience for the team," said U-15 head coach Chris O'Neal. "The boys were able to play high-level games against other MLS competition. We look forward to doing more events like this in the future. The Inter Miami game was a special setting with it being the showcase game of the event on the stadium field and all other participants watching. I was really proud of how the boys competed and dictated how the game went. We were patient and finally broke through against a very good Inter Miami team.

"The Orlando game was interesting. We were dominant in possession but went down 2-0. The boys showed resilience to bounce back and Nico Pendleton scored two really good goals. We created more than enough to have won the game in regulation.

"The winter break is coming at a really good time for us. We’ve had a busy month in terms of quality competitions. It’s a good time for them to take a mental break and start the new year ready to pick up where we left off."