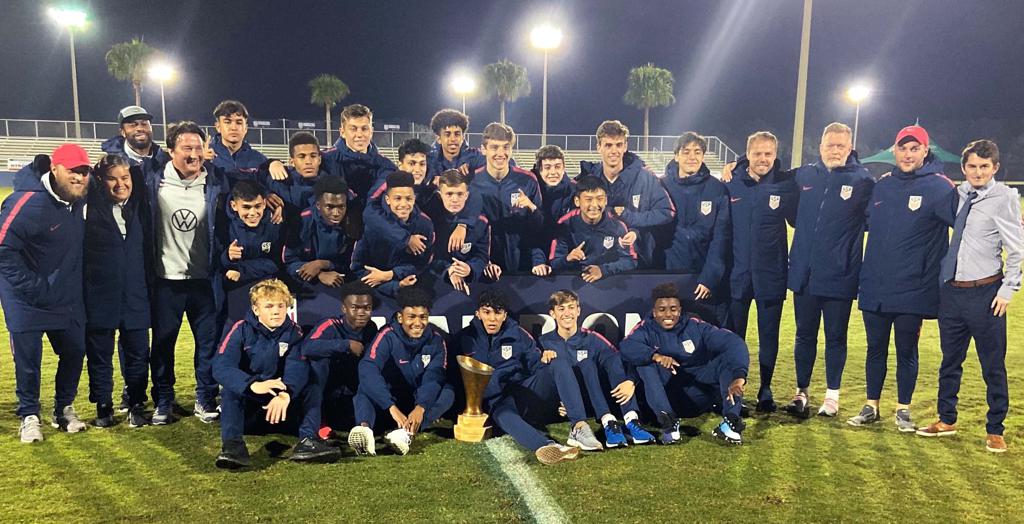 Sporting Kansas City forward Tyler Freeman and the United States U-16 Boys' National Team claimed the 2019 Nike International Friendlies title on Monday with a wild 3-2 victory over Turkey at the Premier Sports Campus in Bradenton, Florida.

Making his third appearance of the tournament, Freeman entered as a 55th-minute substitute with the Americans leading 2-1 and helped his side to an exciting win that sealed first place in the four-team field. The 16-year-old had previously started in the U-16 BNT's 3-3 draw with the Netherlands last Thursday before coming off the bench in Saturday's impressive 2-0 triumph over the USA U-16s.

Turkey took at early lead on Monday but stayed on top for just 12 minutes. The Yanks didn't take long to respond as Brian Gutierrez found an onrushing Moses Nyeman, who slotted home from close range to level the score close to halftime. Breakout performer Dante Sealy decided the contest with two second-half goals in the space of 19 minutes, giving the USA a 3-1 advantage and rendering a late Turkey strike inconsequential.

Shortly after Freeman and the U-16s had wrapped up the tournament championship, Sporting KC Academy midfielder Tucker Lepley and the U.S. U-17 Men's National Team ended their Nike Friendlies campaign with a 2-2 tie against the Netherlands. After starting in the U-17s' first two games, Lepley was a 68th-minute substitute on Monday as the Americans scored twice in the early stages of the second period through Jack De Vries and Noah Jones.

Launched in 2001 before adopting the current format in 2008, the Nike International Friendlies were founded to provide top-level competition for the U-17 MNT and stand as one of the premier annual events on the youth soccer calendar. Current Sporting players and fellow Academy products Gianluca Busio (2017, 2018) and Jaylin Lindsey (2015, 2016) both competed in two editions of the event, with Lindsey helping the USA claim the tournament title in 2016.