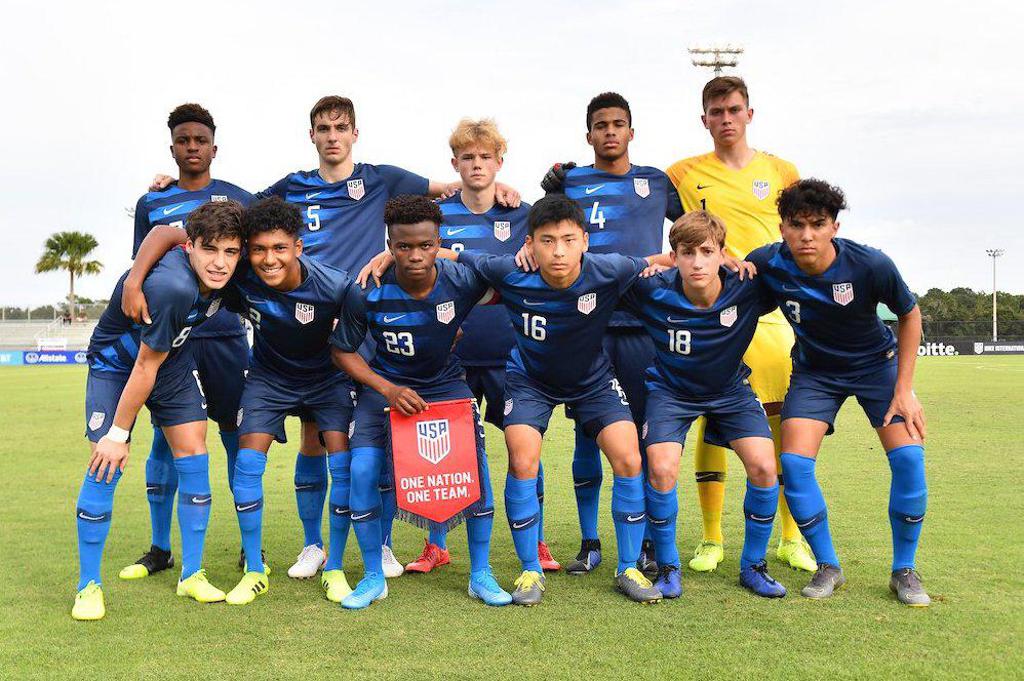 Sporting Kansas City Homegrown forward Tyler Freeman (No. 8 above, bottom left) helped the United States U-16 Boys’ National Team to a 2-0 victory over the U.S. U-17 Men’s National Team on Saturday in the second round of the 2019 Nike International Friendlies at the Premier Sports Campus in Bradenton, Florida.

Freeman came off the bench in the 76th minute with the U-16s leading 1-0 and recorded a secondary assist on Moses Nyeman’s 89th-minute strike that sealed the win. On the opposite side of the field, Sporting KC Academy standout Tucker Lepley earned his second straight start for the U-17s and played the full 90 minutes in central midfield.

Lepley, who made 10 USL Championship appearances for the Swope Park Rangers in 2019, was one of just three U.S. U-17 players to retain his starting spot from Thursday’s 1-0 win over Turkey. After logging 87 minutes in the tournament opener, the diminutive midfielder went wire to wire on Saturday night.

Freeman, who started in a 3-3 draw with the Netherlands in Thursday’s tournament opener, was an impact substitute this time around. The U-16s grabbed a 66th-minute lead through Sota Kitahara and Freeman entered the action 10 minutes later. His contributions paid off in the dying embers of the match as he worked his way down the right endline and unleashed a clever cutback pass that ultimately led to Nyeman’s goal.

Saturday’s result, coupled with the Netherlands’ 2-1 defeat of Turkey earlier in the day, puts the U.S. U-16s at the top of the Nike International Friendlies table heading into Monday’s final round. Freeman and the U-16s will face Turkey at 2:30 p.m. CT, while Lepley and the U-17s will meet the Netherlands at 5:30 p.m. CT. Both contests will stream live on ussoccer.com and U.S. Soccer social media accounts at YouTube, Facebook and Twitter (@USYNT).