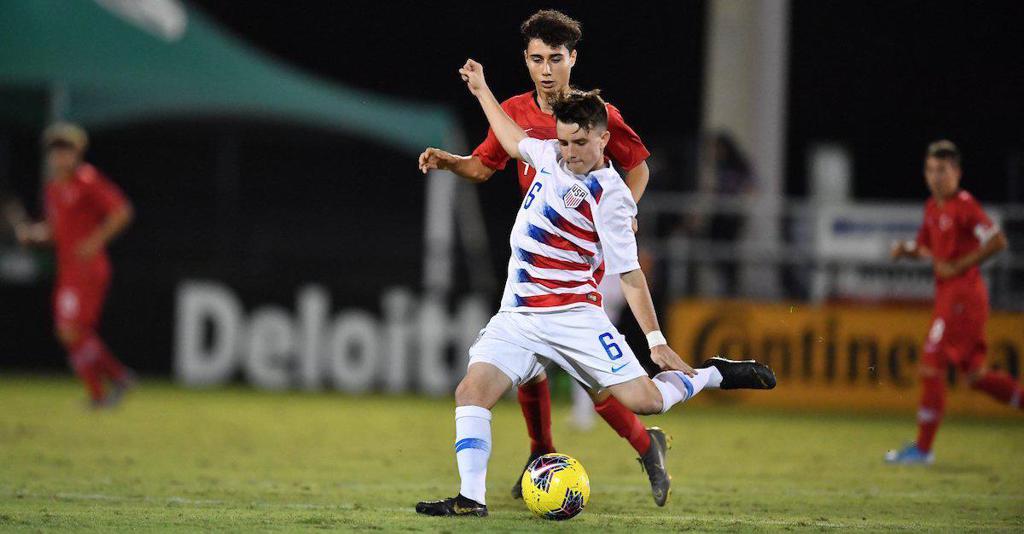 Freeman logged 45 minutes and helped the U.S. U-16 Boys’ National Team to a 3-3 draw against the Netherlands, while Lepley went 87 minutes in the U.S. U-17 Men’s National Team’s 1-0 victory over Turkey. Academy midfielder Jake Davis was originally selected to join Lepley on the U.S. U-17 squad, but a recent injury has ruled him out of the tournament.

Deployed as a winger during his first half of duty, Freeman (No. 8 below, bottom left) had reason to celebrate in the 11th minute when FC Dallas Academy defender Jonathan Gomez unleashed a left-footed sledgehammer into the far corner to give the Americans a 1-0 lead. The Netherlands responded just four minutes later to level the score, and Freeman would exit with the game knotted at 1-1.

The Dutch struck in the 68th and 83rd minutes and carried a two-goal cushion into stoppage time, but the hosts were undeterred in their bid for an unlikely result. D.C. United Academy forward Kevin Paredes grabbed a goal back before Sota Kitahara, a Seattle Sounders Academy midfielder, smashed home the last-gasp equalizer to complete the fightback.

Lepley and the U.S. U-17s were rewarded for their strong start in the 16th minute. Noah Jones, a member of the Red Bull Leipzig Academy in Germany, latched onto a cross from the left wing and placed a header into the back of the net for what ultimately stood as the game-winner.

Lepley, making his U.S. U-17 debut, helped his side control possession and dictate tempo throughout the match, exiting in the 87th minute as a late wave of substitutes helped the Americans close out the contest on top.

Freeman and Lepley are slated to square off Saturday at 5:30 p.m. CT in the second of three matchdays at the Nike International Friendlies. The matchup between the USA’s U-16 and U-17s squads will stream live on ussoccer.com and U.S. Soccer’s social media accounts at YouTube, Facebook and Twitter (@USYNT).

Launched in 2001 before adopting the current format in 2008, the prestigious Nike International Friendlies were founded to provide top-level competition for the U-17 MNT and stand as one of the premier annual events on the youth soccer calendar. Current Sporting players and fellow Academy products Gianluca Busio (2017, 2018) and Jaylin Lindsey (2015, 2016) both competed in two editions of the event, with Lindsey helping the USA claim the tournament title in 2016.