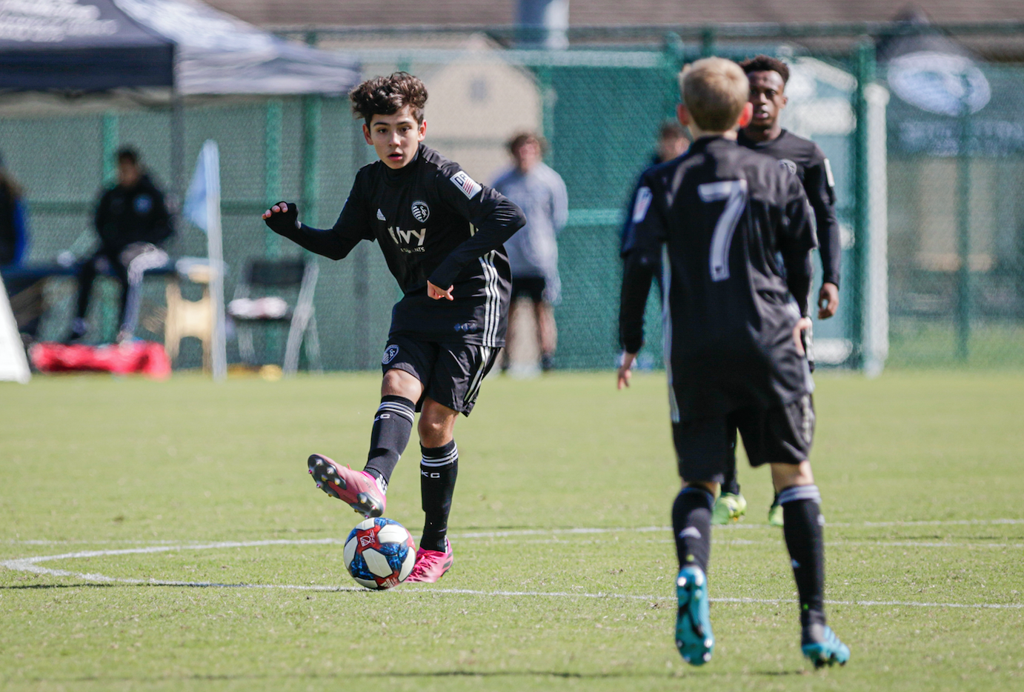 The Sporting Kansas City Academy U-15s and U-17s kicked off their 2019-20 Generation adidas Cup qualifying campaigns on Friday at Swope Soccer Village, earning dissimilar results on the opening matchday of an elite youth tournament featuring MLS academy clubs from across the United States and Canada.

The U-15s claimed a 1-0 triumph over LA Galaxy behind Manuel Romero’s 19th-minute winner, while the U-17s took a 2-0 loss to the Galaxy after conceding goals in either half.

Sporting had their first clear opportunity in the 16th minute when the side’s high press caused a turnover in the back from the Galaxy, but Braxton Arpachinda dragged his shot narrowly wide of goal with LA scrambling back. Two minutes later, Ryan Reid slipped Manuel Romero in on goal, but the Sporting striker rattled his finish off the underside of the bar and out.

Seconds after that near miss, Sporting took the lead as Romero made no mistake after being picked out inside the area by Arpachinda’s lofted cross, crashing a header into the side netting to make the score 1-0.

The Galaxy almost pulled level in the 53rd minute when Adriel Rocha was played through, but Javier Zaragoza spread himself well in the Sporting goal to block his low attempt. Ten minutes later, Gage Akalu cut inside his man on the left wing and tried to sneak the ball inside the near post, but Cody Lindeman did well to tip the ball away.

LA thought they had equalized the third minute of second-half stoppage time when the ball fell to Brendan Bell with just Zaragoza to beat, but his shot smashed off the crossbar and was ushered clear as Sporting hung on for the 1-0 victory.

Sporting were first to threaten in the sixth minute, as Francisco Lopez latched onto a Rokas Pukstas set piece but was unable to steer his acrobatic effort past Galaxy goalkeeper Anthony Ramos.

LA would cash in on a free kick of their own in the 19th minute, taking a 1-0 lead under fortunate circumstances. A goalmouth scrum saw outstretched Sporting goalkeeper Damian Alguera get his mitts to the ball, but Galaxy center back Andre Ramos prodded home from close range to open the scoring.

The hosts responded positively and nearly drew level on 35 minutes. Lopez settled a pass from Pukstas, spun past a pair of defenders on the left side of the box and unleashed a right-footed curler that dipped a foot over the crossbar. He asked further questions of the LA backline five minutes into the second half, but his strike off Edward Mendy’s clever cutback pass deflected wide.

Jonathan Perez doubled LA’s advantage in the 47th minute, lashing a piledriver low into the right corner from the top of the box to complete a slick Galaxy attack. Sebastian Nava almost added a third shortly thereafter, but Alguera did well to cut off the angle and make the stop.

Sporting were left to rue their luck once more in the 66th minute. Cisneros controlled Mendy’s cross near the penalty spot and had a shot blocked, then Lopez’s rebound effort carried inches over the bar.

Next Up: Sporting faces Seattle on Saturday

The U-15s and U-17s will continue their Generation adidas Cup qualifying campaigns against Seattle Sounders FC on Saturday. The U-15s will kick off at 3:30 p.m. CT, followed by the U-17s at 6 p.m. CT. Both contests are free and open to the public and fans can follow @SKCAcademy on Twitter for live updates. Visit SportingKC.com/GA-Cup for schedules, standings and box scores from this weekend’s Generation adidas Cup action at Swope Soccer Village.