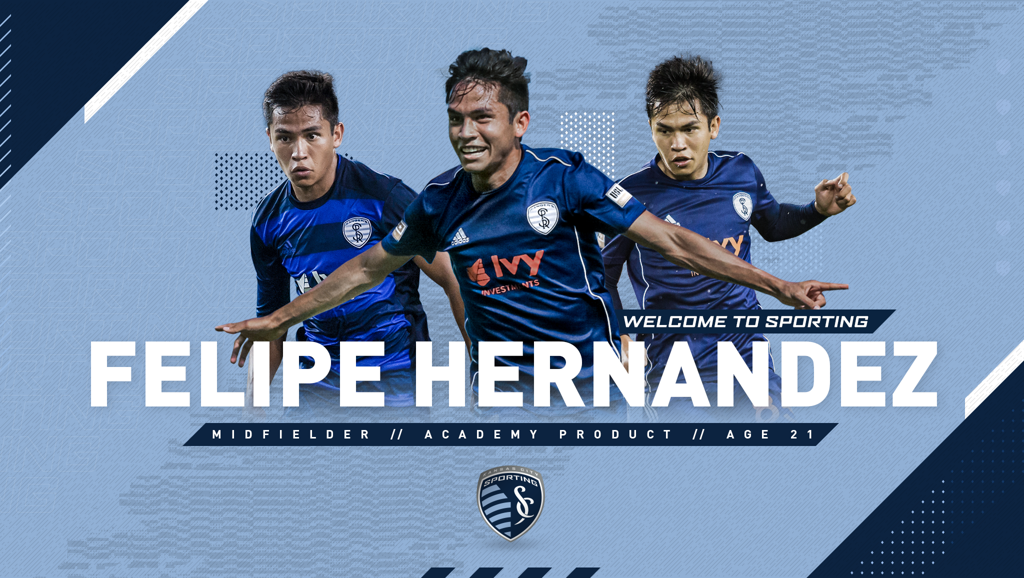 Sporting Kansas City announced today that the club has signed 21-year-old Felipe Hernandez as a Homegrown Player ahead of the MLS Roster Freeze deadline. The midfielder has inked an MLS contract through 2020 with options for 2021 and 2022, becoming the 12th Homegrown Player in club history. Hernandez will be officially added to Sporting’s roster on Monday, Sept. 2.

Hernandez is the first-ever Sporting player to progress from an Academy Affiliate club to the Sporting KC Academy to the Swope Park Rangers before signing with the senior team. His acquisition comes on the heels of a breakout season in the USL Championship, where Hernandez has started 21 of 22 appearances, scored a team-best eight goals and recorded three assists.

In three full seasons with SPR, Hernandez has amassed 13 goals and a club-record 10 assists across 79 USL Championship matches (including playoffs). He tallied two goals and three assists during the 2017 campaign and appeared in all four postseason matches that fall, helping SPR claim a second straight Western Conference title and reach the USL Cup Final. He shouldered an increased role in 2018, starting 31 of 34 appearances to go with three goals and four assists as the Rangers secured another playoff berth.

Born in Ibague, Colombia, Hernandez grew up in Nashville, Tennessee, and played youth soccer for Sporting Nashville Heroes, a former Academy Affiliate of the Sporting Club Network. He moved to Kansas City in the summer of 2014 to join the Sporting KC Academy and flourished into a key contributor at the U-16 and U-18 levels.

At age 16, Hernandez earned a preseason training stint with Sporting’s first team in January 2015, competing in a Desert Friendlies contest against the Portland Timbers in Tucson, Arizona. He continued his development with the Sporting KC U-18s, scoring 15 goals in 40 Development Academy appearances from 2015-2017.

Hernandez signed an amateur Academy contract with the Swope Park Rangers in August 2016, two months before he garnered Bob Gansler Academy Player of the Year honors. Standout performances with the U-18s then landed him his first fully professional contract, as he signed a USL Championship deal with the Rangers in January 2017.

On the international stage, Hernandez was selected to the United States U-19 Men’s National Team for the first time in August 2016 for the Stevan Vilotic-Cele Tournament in Serbia, where he played in all three games. The following April, he ventured to London for his first training camp with the U.S. U-20s.

MLS established the Homegrown Player initiative in 2007, allowing teams to promote youth academy players to professional contracts. These players must meet Homegrown Player criteria, including participation in the club’s youth system and residence in the team’s Homegrown territory.