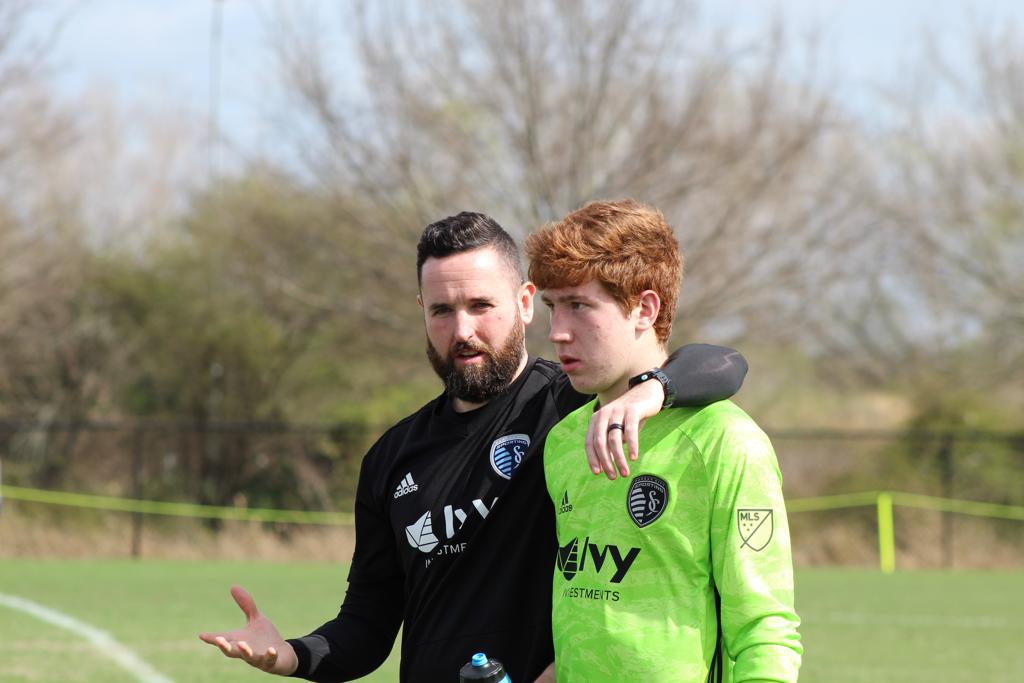 Throughout the summer, SportingKCAcademy.com is publishing a series of Q&A interviews with each member of the Academy's technical staff. In the third installment, we catch up with Sporting KC Goalkeeper Coach Gavin McInerney.

I’m from Dublin, Ireland. I grew up playing football there and became very passionate about it. Then I came here for college and played at the University of Memphis, and then returned to play back home (in the League of Ireland). After that, I had the opportunity to come here.

What do you miss about Ireland?

All my family and friends are in Dublin. I love the bacon there. It’s different than the bacon here in the States. I love all kinds of normal, traditional Irish food. I really miss it.

Why did you get into soccer?

Ever since I was a kid, I was always playing games. In Ireland we have a game called Gaelic football, which is a mixture of rugby and soccer. I played that growing up, as well as hurling, but I fell in love with football and goalkeeping specifically. I kind of transitioned to that, kept playing and worked my way up as much as I could. That was kind of my passion. In the States, MLS has really exploded in the last few years, and it’s only going to keep getting better, so it’s exciting to be around it.

What was your favorite soccer club growing up?

From a young age I was Manchester United fan, and I had two goalkeepers who I looked up to growing up. I was a big Peter Schmeichel fan. I was also a big Shay Given fan, for sure. He played at Newcastle, Manchester City and Aston Villa.

Here at Sporting, in my opinion we have one of the best goalkeepers in MLS right now with Tim Melia. He is a great role model for all these kids to look up to. He’s phenomenal, very humble, it’s unbelievable. The Academy kids are blessed to be able to look up to him because he’s very open. With everyone who goes up there and trains with the first team, he’s always the first guy who is making sure that everyone is comfortable. Things like that show what the club is all about, because that’s the environment. It’s fantastic to have a role model like Tim. Adrian Zendejas and Eric Dick are also very welcoming with the kids.

What is the best part about being a coach?

For me, it’s helping those young players develop and grow, and I challenge them every day. Most days they probably they can’t stand me because I’m constantly on them. But for goalkeeping specifically, you have to put a lot of work in because it’s a very difficult position, and there are a lot different areas where you need to improve.

Especially with our team, there’s a high demand on being able to play with your feet. You have to be comfortable with that. I enjoy the growth, watching these guys get better and then having the ability to see them go open to the first team and train and do well. I also enjoy seeing them with the Rangers. This year we have three guys that are signed professionally and they all eligible for the Academy again next year, which is very good because they are very young. They have a very high ceiling, as they have the ability to go on and be in the first team eventually. Of course, there’s going to be a lot of work ahead, and for me it’s always a great challenge. It’s looking at that vision of the pathway of where they need to go, and then challenging them every day to be better. That’s probably the best part about being a coach. This is not just a job; this is a passion. Every day to come in and be around it is amazing.

First of all, it’s the structure from top to bottom. If you look at our ownership, they are very organized individuals. Even in their professional careers, there’s a lot of success with their businesses and the structure of businesses. When you bring it into the club on the business side, they are very, very organized and ahead of the curve in terms of how they promote the team. Even when you drive around the city, the amount of people you see wearing Sporting gear, or the Sporting KC billboards you see, it’s all very well organized.

Then you take it to the football side of things. You look up to Peter Vermes and the first team staff, and it’s incredible. The structure and the attention to details are incredible. When you come down to the USL Championship, you see the immigration of the Academy players into the USL. We have brought up three USL goalkeepers from the Academy, which is fantastic. I don’t think that any other USL team has that.

Outside of that three goalkeepers, we probably have two more who are close to pushing into that group as well. We have a similar organization from all the teams downward. Everything has been integrated, and there’s a constant inside conversation about how we get better and better. We are always looking to progress. We don’t want to stay still where we are at. All of those things combining is what gives us the environment to create the best players.

If we look at players like Daniel Salloi, Gianluca Busio, Tyler Freeman, Wan Kuzain and Jaylin Lindsey, they’ve all started to break into the first team from the Academy. Now that the doors are open, there are going to be more guys coming through. We have to make sure that we have high-level goalkeepers in every age group, pushing them through the USL and eventually into the first team.

I think that’s what excites me every day: having the ability to make that empire is very special. It’s different, and not every club has that. Once you bring guys here, they are blown away by the facilities. There’s not one club in Ireland that has a facility like Swope Soccer Village, so that’s incredible. Sporting KC is a phenomenal team, and there’s not a day that I don’t walk into the stadium and be blown away. To go and watch a game there, and be a part of it, is something different. On gamedays the energy is great. The production that goes into gamedays is phenomenal.

What is your favorite part of Kansas City?
When I got here, I was actually really surprised how big Kansas City is. I didn’t know much about it before I came here. I live in Overland Park, and my wife and I like to explore a lot of different areas in the Midwest. It’s a really cool city, hot in the summer and a lot of tornados and storms so that is unique compared to Europe. My wife is from New York, and that’s also different from KC, but we enjoy it. We try to embrace the different cultures here, especially from Ireland.

What is your favorite music?
My favorite bands are U2 and Oasis. Bono is amazing, he is a legend. U2 was here in Kansas City recently and I was able to see them.

What is your favorite movie?
I really like criminal movies like The Godfather and The Usual Suspects. Great stories, long movies, good acting, I like all that.