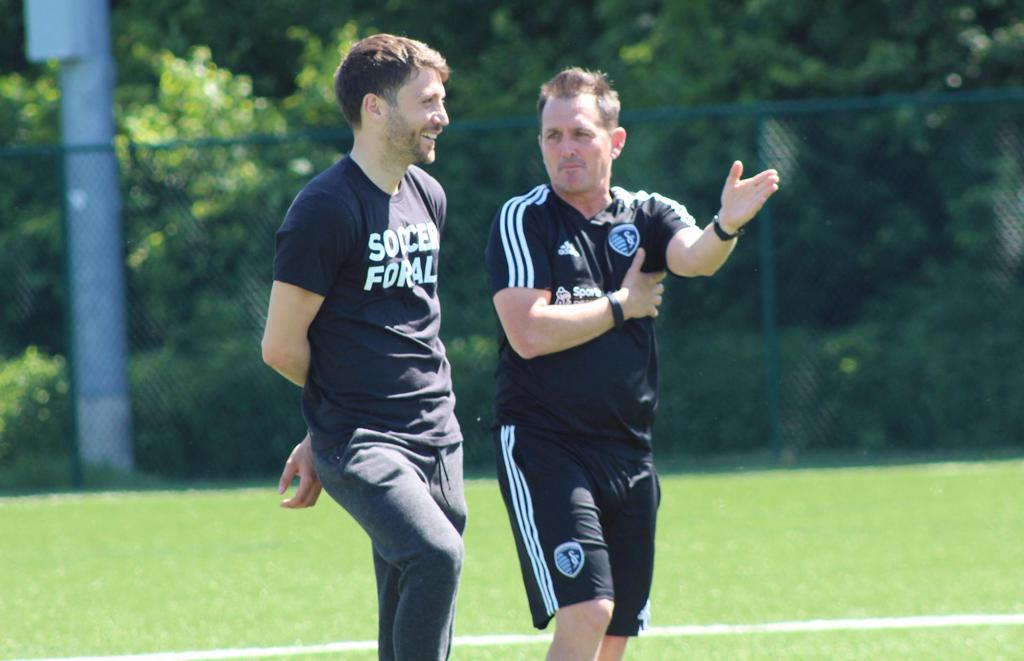 Throughout the summer, SportingKCAcademy.com is publishing a series of Q&A interviews with each member of the Academy's technical staff. In the first installment, we catch up with Sporting KC Academy Director Jon Parry.

Tell us about your background and where you are from.

Why did you develop a love for soccer?

I started kicking the soccer ball when as soon as I could walk. My dad was always kicking the ball with me. He played college soccer back then in the 1950s at the time when the sport was rare in this country. There weren’t a lot of college programs back then. He played at Le Moyne College, which is a Jesuit school in Syracuse, New York. He introduced me to the game and I fell in love with it. I have played or coached ever since.

Did you have a favorite team or player growing up?

When I was growing up, I used to follow the NASL. I loved the New York Cosmos, and Giorgio Chinaglia was my favorite player. He was a forward and I remember him scoring a lot of goals, and later I played the same position as him. Nowadays I like Barcelona. Lionel Messi and Cristiano Ronaldo are incredible to watch, and I think when those guys are gone, we are going to look back and be like, ‘Wow, they were and always will be very special.’

The vision that our owners have had has been incredible, and the leadership with Peter Vermes I think is very unique. To have owners that let the soccer guys make the soccer decisions is great, and they have a lot of trust in the soccer decision makers. I think that trickles down to all the way to the Academy. The resources that we have are incredible, from the facilities, full-time staff and our culture.

I am the longest-tenured Academy Director in Major League Soccer. I’ve been here 11 years, and I think that the stability we have has allow us to work through a lot of the issues that other clubs have faced. We also have a good scouting network in place now, and I think having a full-time staff where coaches can focus on coaching just one team has been extremely beneficial to the successful of our program. I used to coach three teams in the Academy at one time, and me being off the field has allowed me to take a step back and really observe all facets of the Academy. It’s a big project, and we have come a long, long way and we continue to make improvements to be the best Academy in Concacaf.

The biggest challenge for me is managing all the staff now and not being on the field. I do miss coaching, but I think this is an extremely important job going forward, especially to continue to develop world-class players in the United States. I’ve been to Europe and visited several academies and it’s always good to see where we are in comparison and learn. I feel like we’ve arrived in a sense. People are blown away when they come to Kansas City and see what we have in our Academy and the way we work with the players.

What’s the best part about your job?

I like building things, and I feel like this is a project that taken us over a decade to lay a foundation for. I like working with other people and seeing them grow in their profession and as people. There is also a lot of satisfaction in watching a kid coming into the academy at 8, 9 or 10 years old and matriculate all the way through our pathway to become a professional. We are still in the process of fine tuning our pathway, but I am really, really excited to see what the future holds with the talents that we have coming up through the Academy.

What are the values of the Academy?

We have four core values: Team First, Work Ethic, Intelligence and Winning Mentality. Those are from the first team all the way down to the Academy, and they are all equally important.

Everybody has to be team first here, and that is something that we preach to the kids and is extremely important. We are developing individuals in the Academy, but we really need the team to bring those individuals along. When you get to the first team, there are a lot of sacrifices made to win. With work ethic, we always talk about having a tremendous work ethic on and off the field.

We talk about intelligence a lot with the boys. Of course, they must be intelligent on the field and have a high soccer IQ. They also need to be intelligent off the field and make good choices in school, at home and in life. The last thing we want to teach them is having a winning mentality. I wouldn’t say it’s winning at all cost, but it’s winning the right way and being competitive in every game. Eventually, that will hopefully turn into championships for the first team.

It was really special because it was the first year Major League Soccer ever had the award. I think we got that award for numerous reasons.

We also just added a scout, who has been a big plus. That’s the next thing for us is to really have a pulse on the best talents on every age group across the country.

What is your favorite part about Kansas City?

I love the barbecue and it’s the best in the world! Kansas City is a cool place to live and there’s a lot to do, and it’s a great place to raise a family. When we go out with the family, we like eating barbecue, Japanese, Mexican and Italian.

I am really hooked on Netflix. I am currently watching Breaking Bad.