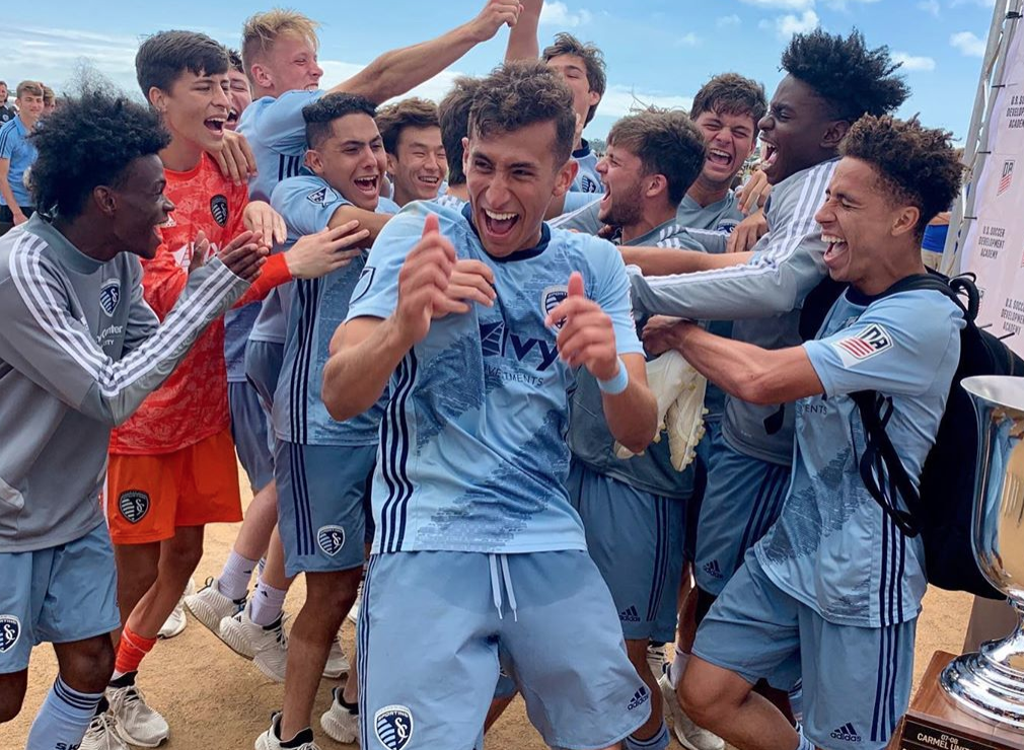 The Sporting Kansas City U-19s are one win away from becoming the club’s first Academy team to reach the U.S. Soccer Development Academy National Championships.

A first-place finish in Group B of the Development Academy Playoffs has vaulted the Sporting KC U-19s into a mouthwatering quarterfinal clash against Saint Louis FC, slated for 6 p.m. CT Monday at SoCal Sports Complex in Oceanside, California. Follow @SKCAcademy on Twitter for live, in-game updates.

Monday’s showdown could be the precursor to a new rivalry between Sporting and Saint Louis FC, should the latter join Major League Soccer as an expansion team in the coming years. The winner will punch a ticket to the Development Academy Championships at Orange County Great Park in Irvine, California, with the semifinals on July 8 followed by the national championship and third-place match on July 10. 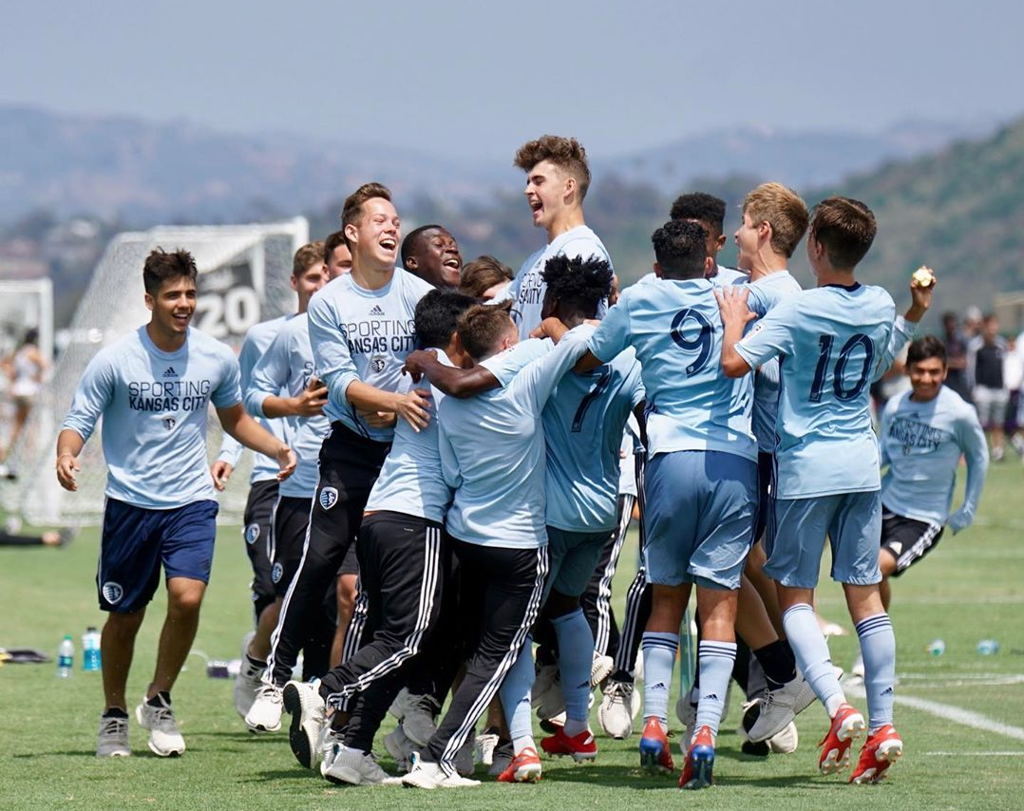 Led by head coach Rumba Munthali, the U-19s are the third Sporting Kansas City Academy team to reach the Development Academy Quarterfinals. In 2016, the Sporting KC U-18s overcame the odds to win their group in stunning fashion before suffering a 1-0 extra-time loss to eventual national champion FC Dallas at the quarterfinal stage. In 2017, the Sporting KC U-16s—featuring current Homegrown Players Gianluca Busio and Jaylin Lindsey—took a 3-0 quarterfinal loss to Real Salt Lake AZ after finishing atop their group.

The U-19s began their Group B campaign in Oceanside on Monday, battling to a 2-2 draw with Sacramento Republic FC. Mason Leeth gave Sporting the lead after just eight minutes, but Sacramento responded with goals in either half to go up 2-1. Kaveh Rad restored parity from the penalty spot in the 77th minute, giving his side what proved to be a vital point.

Sporting rounded out the group stage in style by cruising to consecutive 4-0 victories. A wire-to-wire win over Columbus Crew SC saw Swope Park Rangers forward Sean Karani score in both halves, while Leeth and fellow SPR player Mo Abualnadi also found the back of the net in the second period.

First place was effectively clinched with an emphatic defeat of the Montreal Impact on Friday. Abdu Kikhia landed the first punch on 11 minutes and Kaveh Rad doubled the lead seven minutes later. Sporting were well on their way to victory and added icing to the cake in the second half, with Cameron Duke bagging a spectacular goal and Kikhia adding his second in the dying embers. 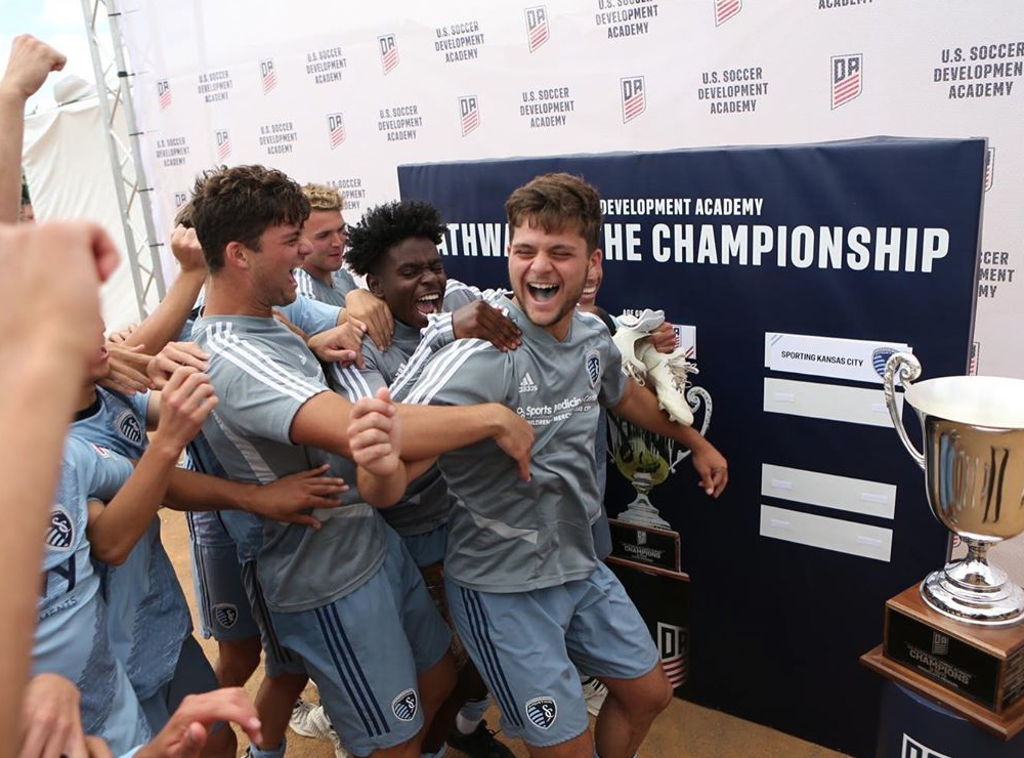 The Sporting Kansas City U-17s came agonizingly close to sealing a quarterfinal berth of their own, winning two of three matches in Group B at the U-17 level, but fell just short by virtue of goal difference.

A 3-2 loss to United in the group stage opener on Tuesday ultimately decided Sporting’s fate. Danny Goddard and Dylan Hooper bagged first-half goals to give Sporting a 2-0 cushion, but United’s John Franks scored in the 43rd and 76th minutes to pull his side level. Bryan Silva then struck a 90th-minute winner to condemn Sporting to a narrow defeat.

Sporting responded admirably with wins in their final two group stage fixtures, first defeating FC United Soccer Club in a 3-2 thriller on Thursday. After relinquishing a 2-0 lead on Tuesday, Sporting flipped the script: falling behind by two goals in the first half, Daniel Gutierrez kickstarted the comeback with a goal on the stroke of halftime. Clarence Weah, the cousin of U.S. international Timothy Weah, was heroic in the late stages as he struck in the 79th and 84th minutes to preserve Sporting’s hopes of winning the group.

While the U-19s and U-17s battled in the playoffs, the Sporting KC U-15s also competed at SoCal Sports Complex in the U-15 Development Academy Summer Showcase.

Led by head coach Chris O'Neal, the U-15s concluded their season with friendly matches against three elite academies from across the country, including fellow MLS outfits LA Galaxy and the New York Red Bulls.

Sporting kickstarted the Showcase with a 5-2 win over Players Development Academy (New Jersey), receiving a Dalton Visconti brace and additional strikes courtesy of Gage Akalu, Jack Sartino and Salat Mukoma. Friday's 1-1 draw with the Galaxy was highlighted by Nati Clarke's second-half equalizer, while Sunday's 1-1 stalemate against the Red Bulls included a goal from Jack Dean.