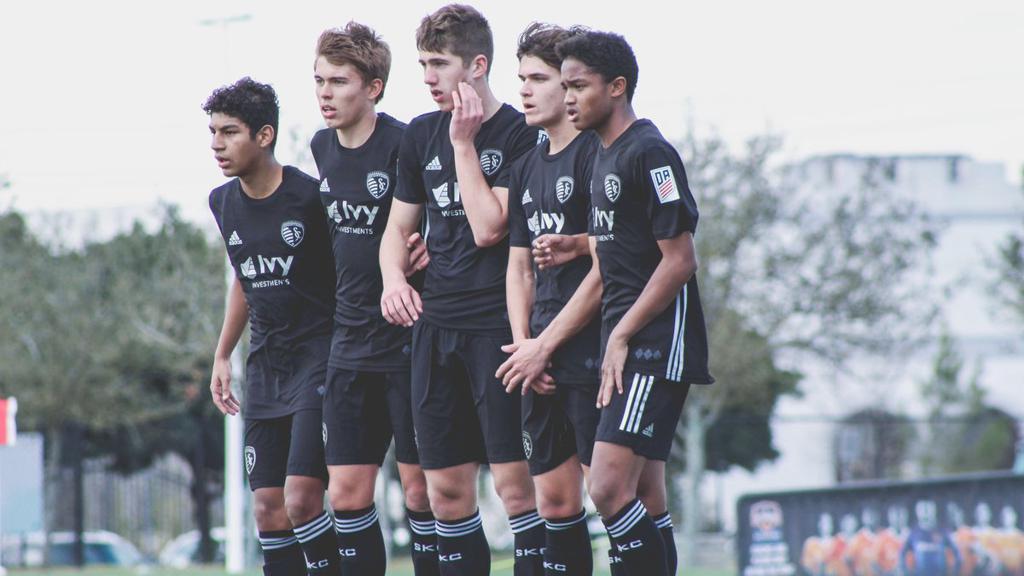 The Sporting Kansas City Academy showed no signs of rust this weekend, combining for six wins in as many matches as the 2018-19 U.S. Soccer Development Academy season continued after a three-month winter break.

The U-19s, U-17s and U-15s combined to go a perfect 6-0 against the Rio Grande Valley FC Toros Academy, sweeping a pair of doubleheaders at HEB Park in Edinburg, Texas, to get the second half of the Development Academy campaign started on the right foot.

The Sporting KC U-19s (10-2-3, 33 points) remain in hot pursuit of first place in the Frontier Division following two workmanlike victories against their Texas-based counterparts. Saturday’s contest remained scoreless until the 63rd minute when a well-worked attack saw Massimo McGuire and Abdu Kikhia combine to set up Sebastian Kennedy for a tidy finish.

RGV equalized just three minutes later, but the lead was restored on 72 minutes as Kennedy bagged his brace off a feed from Dontell Gilyard. In the game’s final moments, 16-year-old Clarence Weah—the cousin of U.S. international forward Timothy Weah and the nephew of African soccer legend George Weah—made his Sporting KC Academy debut to help close out the 2-1 triumph.

The U-19s continued their winning ways on Sunday with a 2-0 result, landing the first punch in the 33rd minute when Ciaran Winters pounced on a deflected free kick and slotted low past the keeper. Mason Leeth helped seal the win late in the second half, beating multiple defenders before assisting Kikhia.

U-17s close in on top three

The U-17s (8-6-1, 25 points) inched closer to a top-three spot in the Frontier Division—and the playoff berth that goes with it—after bagging six goals across two routine victories. The first was sparked by midfielder Jake Davis, who was among the five Academy players who trained with the Sporting KC first team during their January preseason camp in Scottsdale, Arizona.

Davis opened the scoring on Saturday with a brilliant free kick, and the game remained 1-0 until RGV leveled proceedings just after the hour mark. Sporting finished strong, however, as Francisco Lopez pulled his team ahead on 67 minutes before Davis struck again—this time with a remarkable “Olimpico” goal straight off an in-swinging corner kick that curled beyond the keeper and into the far-side netting.

The 17-year-old Davis was at it again on Sunday, breaking a 0-0 deadlock with another direct free kick in the 68th minute. Edward Mendy doubled Sporting’s cushion and effectively clinched the win two minutes later, rendering a late RGV penalty inconsequential. A notable substitution in the late stages saw 12-year-old goalkeeper Misael Mena make his Sporting KC U-17 debut.

Not to be outdone by their Sporting elders, the U-15s posted a pair of shutout wins behind strong goalkeeping from the abovementioned Mena and Alex Quant. Saturday’s 2-0 result produced goals in either half, the first of which from Dalton Visconti and the second from U.S. youth international Osvaldo Cisneros.

Sunday’s game finished 3-0 and produced early fireworks, with an impressive one-handed save by Quant immediately followed by a Gage Akalu assist to Cisneros. Daniel Gutierrez dispatched a penalty kick in the 21st minute to double the lead before Akalu got in on the scoring with a terrific volley that caromed off the woodwork and nestled into the net.

Up Next: Tripleheader at Houston Dynamo

The Sporting KC Academy will aim to stay hot in the state of Texas next Saturday, visiting fellow MLS academy Houston Dynamo in a tripleheader at Houston Sports Park. The U-19s will kick off at 9 a.m. CT, followed by the U-17s at 11 a.m. and the U-15s at 1 p.m. Follow @SKCAcademy on Twitter for live updates next Saturday and throughout the season.